Below left: Zoom Board meeting, January 2021; below right: Tom Heater (alongside Patty Lacy) 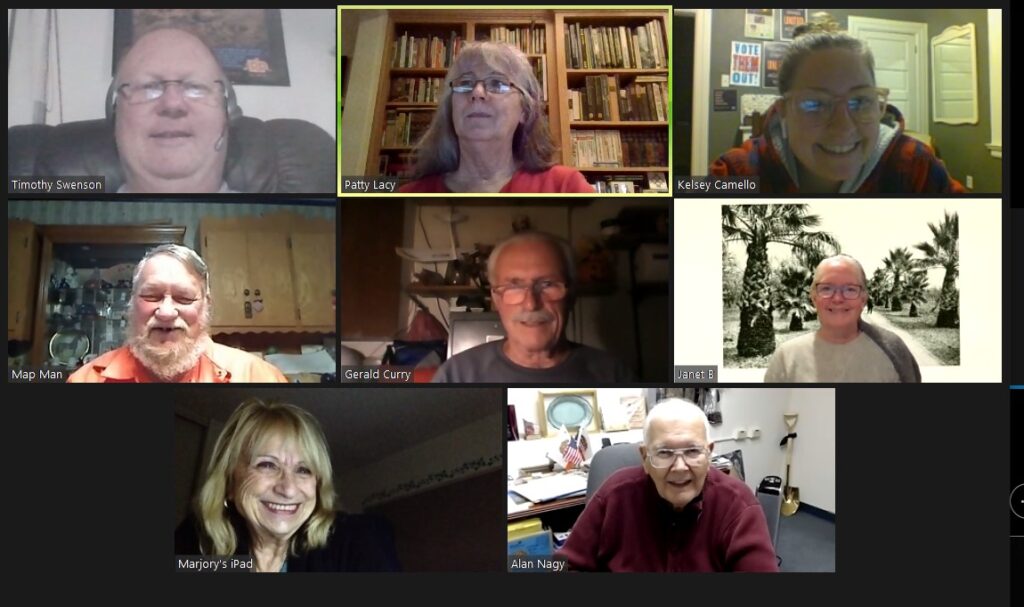 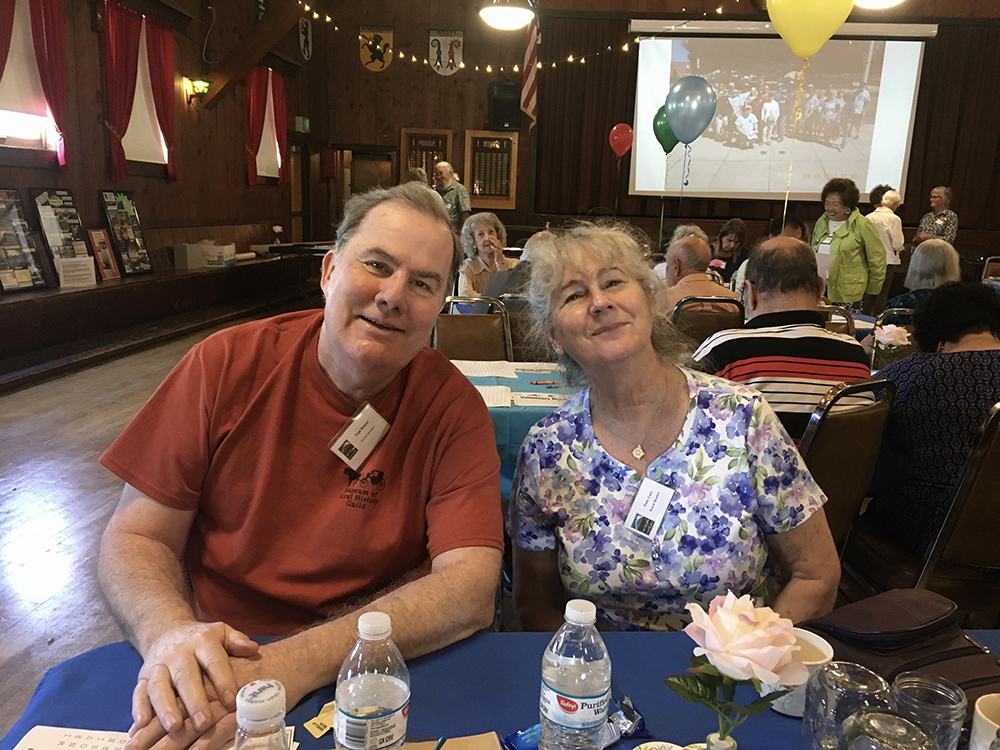 Patty Lacy is a native of  Mission San Jose and has long had an interest in history. Over the years she has been involved in various Irish, English, and American Civil War historical re-enactment groups. She  especially enjoys the clothing and life-styles aspects of history. Patty currently serves on the George Patterson House Advisory Board as one of the Washington Township Historical Society’s representatives. She is one of the original members of the Museum of Local History and is excited about how it is developing as an important local resource.

My history with Fremont goes back to when I was a child going on family camping trips and, when driving through Mission San Jose, admiring all the palm trees along Mission Blvd. It would be years later in 1969 that my young family and I moved to the district not two blocks from the fire station that is now The Museum of Local History. In fact, we moved into a home a few doors down from Regina Dennie, a long-time stalwart of the museum and of Mission San Jose. I started my volunteer activities with weeding and sweeping and kept this up for several years. An opportunity arose to take over as bookkeeper that I accepted, having worked several years providing that service for my church followed by work at a real estate company. Then the treasurer decided that vice president was more suited to her talents, which are many, and I suddenly found myself treasurer before I could say “finance report”! Those kind of things happen in volunteer organizations, do they not? But it has been a privilege to assist the talented volunteers who are dedicated to the preservation of local history and its dissemination in the community at large and in local schools.

Tim has had “Assassination in Decoto” published by Mines Road Books and “Images of America: Union City” published by Arcadia Press.

I was born in Oakland, CA. In 1966, my family moved to Fremont. I graduated from Mission San Jose High School, married, raised two sons and I have 4 grandchildren. I have a degree in Early Child Education. I worked twenty-years at Mission San Jose Elementary as an Administrative Assistant. I later retired and became a volunteer at the museum in 2013. I work as a docent for the museum and for rancho tours for the elementary school classes. I also enjoy being the Museum Display Coordinator and I am on the museum board. The museum is a great place to volunteer and we are always looking for more people to help out! Come and join us!

Al Nagy currently serves as the Mayor of Newark and has been on the Newark City Council since April, 1980. He and his wife Connie have resided in Newark since 1968. His interest in Newark history goes back to 1975-76 when he worked with others on the Newark Days Bi-Centennial Committee. It was through this committee that the book “Centennial History of Newark” was written by Bruce MacGregor. Al also contributed to Bruce’s second book; “Newark a City at Fifty”.

Al feels it is important to capture the unique history of Newark and recently became acquainted with the Washington Township Museum of Local History. The organization has a formal process for cataloging and storing articles, photos and artifacts which reflect the history of this area in years past. His goal is to provide a virtual history of Newark in an online website.

In addition to his Council duties, Al is a founding Board Member of the Viola Blythe Center, the Newark Library League and serves on the Newark Graffiti Abatement team. He was Newark’s Volunteer of the Year in 2009 and has been awarded a JCI Senatorship and lifetime membership in JCI International.

Mr. Guedon moved from Spokane Washington to Fremont in 1965, graduated from Irvington High School in 1969, and continues to reside in Fremont.  His interest in Washington Township history dates to the early 1970’s as a volunteer at the Shinn House Restoration Project.  He is a life time member (awarded), past board member and president of the of Mission Peak Heritage Foundation; former project leader for the 1976 reproduction of Thompson and West’s 1878 “Historical Atlas Map of Alameda County”; and, currently volunteers at both the Washington Township Museum of Local History and the Society for the Preservation of Carter Railroad Resources (SPCRR) at Ardenwood.

His 1978 Master thesis in Historical Geography from California State University Hayward [East Bay] examined the break up and related boundary persistence of Rancho Potrero de los Cerritos, Ex-Mission San Jose, and Rancho Agua Caliente. Between 1978 and 1984 he was free-lance Historical Geographer/Archaeologist on numerous projects throughout California and since 1984, an employee of Basin Research Associates.

Elizabeth (Libby) Macris was born and raised in Burbank, CA. She attended Burbank High School, home of the Bulldogs and graduated in 1969.

Libby has lived in the Bay Area since 1980. She has worked in various capacities in the Finance department of a Research Institute on the Peninsula. For the last 10 years, she has been an Accounting Manager. Libby currently works for the Institute half time.

Libby has lived in Newark since 2006. She is a volunteer for three other non-profit organizations besides WTMLH. Libby is the Treasurer of the board for Viola Blythe Community Service Center of Newark, CA. She is also Treasurer of the board for Metas, Inc., a Latina High School mentoring organization. Libby is also the chairperson for the Newark Days Celebration Community Information Faire. This event is held annually in September for the birthday party for Newark. She is also a R.A.V.E.N. volunteer for Newark PD. Her volunteer duties for them include Graffiti Abatement. Libby was also appointed to an oversight committee.

Libby has one daughter and one granddaughter. She enjoys spending time with them as much as possible.

Plein Air at the Rancho… for Kids