Born in Newark in 1880, Elizabeth Lowrie was the youngest and the last surviving member of her immediate pioneering family from Washington Township (now Fremont, Newark and Union City). Her father, George Lowrie was born in Scotland in 1832, immigrated to the United States in 1847 and settled in Washington Township in 1853. He worked as a farm hand and cook (with a specialty in bread making) between Newark and Alvarado and settled in Irvington. George was known for his ability to spin long, comical yarns — a trait that he passed on to his youngest daughter. In 1871, he married Harriet Thompson. Together they had five children.

Hay baling was intense, with most of the work done by manpower. The men jumped and trampled on the hay to pack it into solid bales. Typically, farm hands consumed five meals a day. On top of his regular duties, together George and Harriet prepared and served food to the workers. This was the family that Elizabeth was born into. 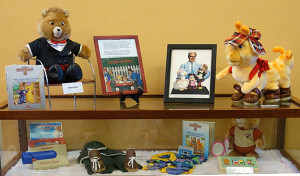 The talking bear took the world by storm in 1985. Born in Fremont, Teddy Ruxpin and his maker, Worlds of Wonder, peaked with $327 million in sales in 1987. Teddy Ruxpin was the official spokesbear for the National Center for Missing and Exploited Children. His picture appeared on the visitor’s brochure in Fremont. But fame was fleeting. Two years later, in 1989, Worlds of Wonder was in bankruptcy court.

In its glory days, Teddy Ruxpin sold for $80. Forty different cassette tapes fit into the tape deck in its back. A computer chip read a digital encoding on each tape and sent a signal to motors that operated the bears movable mouth and eyes.

Teddy, Grubby and other friends had adventures in Grundoland.

The Touchable Then & Now Table 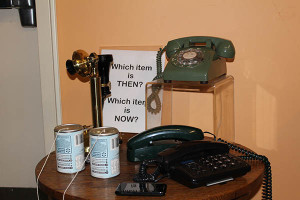 This new exhibit will focus on hands-on items, all of which our visitors may touch and play with. We are hoping this exhibit will excite all of our visitors, but especially school age children. Items will include an adding machine and a digital calculator, an old telephone and cell phone, and two view masters – an antique one and one from the 1950s (with view cards too)! It should be a fun and engaging learning display. As the exhibit remains in the Museum various items will be rotated in and out of it.

We encourage you to stop in and see the new Sewing Corner exhibit. Did you know that we have one of the first ever patented Elias Howe treadle sewing machines, as well as a pattern dating back to 1889? We also have a beautiful piece of fabric art on display that was collectively created by members of the Peacemakers Quilt Guild and the Coyote Hills Girls Scouts.