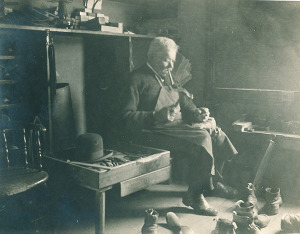 The Mission Shoe Store display includes tools for making shoes, a cobbler’s bench, shoes and boots and a potbelly stove. The store was located on Mission Boulevard. You can take a walk to downtown Mission San Jose and find the store.

Activities: Draw your shoe outline and measure its length and width.

Joseph Sunderer began making custom-made boots, shoes and slippers in Mission San Jose in April 1868. He had sailed from New York around the Horn. Upon arriving from his native Germany in New York he worked there for six months making shoes.

He bought a home on Vallejo Street, now Mission Boulevard, in 1887, and established his shoe store business. Ten years later a second fire destroyed his business. He began to rebuild on the same site.

In 1887, Joseph helped organize the Ancient Order of United Workmen Lodge, and for twenty years he served as treasurer. He was a pound master, road overseer, deputy constable, unofficial town mayor, and served as a school trustee for thirty years. He was the first fire chief for the volunteer fire department that he organized.

His best shoe customer may have been the Dominican Sisters who cared for many children. At a cost of $133.35, in one six-month period he mended 286 pairs of shoes for them.