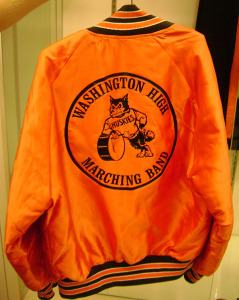 The bell topped the Washington Public School built in 1875 located at Lincoln and Unions Streets in Irvington.

The 1850 Mormon chapel built by John M. Horner in Centerville at the site of the later railroad station was probably the first English speaking school in California as well as the first non-Catholic chapel in Alameda county. It was also the first Mormon meetinghouse in California. John M. Horner was one of 238 Mormons who came to Yerba Buena (now San Francisco) on the Ship “Brooklyn” in 1846.

Sundays were shared with Presbyterian and Methodist congregations and served as Centerville’s first school. In 1862, he structure was moved to Washington Corners to the corner of Main and Union Streets to serve as their first school. The school is pictured with the schoolchildren in 1873. Included in the picture are Horner children, and Charles Schaffer, teacher (with tie) in the lower left. The Horner school was modified and served as a home for the Hirsch family until it was razed sometime after 1964. The green board on exhibit is from the original building.

For thousands of years our area was home for villages of Ohlone Indians. Education was a family affair. Parents and relatives taught their children the Ohlone ways, how to live together and how to gather food from the land.

When the Missions were formed, the Mission padres conducted the education of the Ohlone. They converted thousands of Ohlones to the Catholic religion and taught skills needed to farm the land, tend herds, make clothes, manufacture tools, prepare food, and construct buildings.

After Mission San Jose was secularized in 1834 the Mexican rancheros either sent their children away to be educated or established their own schools. Formal education was limited to those who could afford tutors or private tuition.

The first English-speaking schools were subscription schools because they were supported by subscriptions instead of taxes.

John Horner built a schoolhouse in 1850 on his land in Centerville. The building was the social and cultural center of the community. Several churches met there also. In 1862 the building was moved to Washington Corners (Irvington) where it served as the first public school.

When California became a state, the Tri-City area was part of Santa Clara County. In 1853 Alameda County was formed. The county was divided into Townships, and today’s Tri-City area became Washington Township.

In 1891, the people of Washington Township formed Union High School District #2- the second in the state. Classes were conducted at the Masonic Lodge until a high school house was built in Centerville in 1893.

The school populations remained constant until the post-World War population increase in the area. Today there are three unified school districts in the Tri-City area with a population of more than 52,000 students.