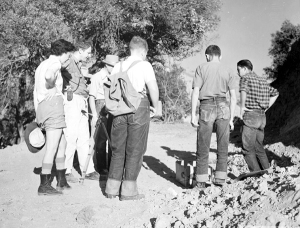 In the Irvington gravel pits, known as Bell Quarry, located off of Osgood Road from 1944 to 1960, the Boy Paleontologists of Hayward unearthed plant and animal fossils including mammoths, saber cats, horses, camels, and even rodents. A new species named Tetrameryx irvingtonensis, a four-pronged antelope, was the most significant find. Presently Freeway 680, between Washington Boulevard and Durham Road, covers this fossil field.

The round case includes the parts of a mastodon leg bone, and a jaw with teeth. In the other case there are fossils from horses and camels.

In the southern portion of Alameda County, a plain extending eastward from San Francisco Bay ends at the Irvington Hills. Due to the splitting effects along the Hayward fault, the hills are on one block of rock and the plain is on another. Because of the downward movement of the Bay block and the upward movement of the hills block, sedimentary beds along the hill’s western boundary dipped 20 to 25 degrees to the northeast and were distinctly folded.

These beds were composed of such sediments as clay, sand, and gravel and were as loosely compacted as when first deposited by streams in the mid-Pleistocene time.

The sediments contained rich concentrations of animals and plant fossils. The richest deposits were about one mile south of the center of the former town of Irvington.

East of the low-lying Irvington Hills is Mission Peak. Millions of years before the Pleistocene, marine and fresh waters deposited sediments now found in the Mission Peak ridge. These sediments became a rich source of marine fossils. The fossils were buried under marine waters about 12 million years ago during the late Miocene time. A few of the Miocene fossils have been found in the sediments of the lower hills, indicating that some of the Irvington sediments were produced by erosion of the higher Mission Peak strata.

Three separate fossil deposits existed near the Hayward fault east of Irvington. An older deposit of alluvium (stream deposited sediments) had been cut and its east portions elevated along a fault. Erosion exposed gravel that was excavated for commercial use. The walls of the excavation were, in many cases, vertical and more than a hundred feet high, and in the course of this excavation excellent mammal fossils were discovered.

One of the Irvington gravel pits was known as Bell Quarry. The Bell Quarry was located at the junction of the north and middle canyons east of Osgood Road. A large number of Pleistocene fossil bones have been taken from this quarry, including bones of animals that are now found only in Africa or Asia, and several fossils that were new to scientists. The age of the Bell Quarry fossil deposits is given as approximately 1.3 million years.

Stanley and Anna Bell operated the Bell Sand and Gravel Quarry that covered about 40 acres east of Osgood Road. Hundreds of thousands of cubic yards of clay, sand, and gravel were removed from the site by workmen using bulldozers and power shovels. Most of the quarry walls were vertical, and many were over 100 feet high.

In 1940, Wesley Gordon visited the quarry and picked up a few fragments of a mammoth fossil from the surface. Four years later, he organized a group of boys and brought them to the Bell Quarry to collect fossils. He taught them how to locate and remove fossils from the quarry walls and the gravel in the pit.

The boys spent over 400 days removing thousands of fossils and preserving them for scientific study. They collected fossils from 1944 into the fifties and became widely known as “The Boy Paleontologists”. Their discoveries were so significant that the boys became famous and eventually appeared on radio and television, and were even featured in Life magazine in 1945.

The boys usually arrived at the quarry in Gordon’s car armed with picks, hammers, toothbrushes, shovels, chisels, and brushes. They would stop at the Bell home to pick up fossils that had been rescued from the gravel washer by Mr. and Mrs. Bell. The boys would dig into the walls in search of fossils. Many fossils were screened from a layer only nine inches thick. Some 29,000 bones and fragments were eventually removed with the utmost care and preserved for future study. One day 68 specimens were collected. The boys donated their finds to the University of California, Berkeley, for research, because their motto was, “What we find belongs to the public domain of science”.

The fossils were from the Pleistocene, or Ice Age, and dated back over 1 million years. The site was declared to be the most important early Pleistocene deposit in North America. The boys found fossils of plants, clams, fish, frogs, turtles, rodents, wolves, camels, horses, birds, seals, deer, mammoths, mastodons, ground sloths, and saber-toothed tigers. They discovered the remains of a dire wolf and a mammoth buried together in one spot, and the jaws of a horse, a camel and an antelope together in another place.

Several of the fossils found at Irvington were new to scientists. The Irvington bear was truly a monster. He stood about 14 feet tall, the largest bear known. The most amazing find was an antelope with four horns. (Modern antelope have only two horns.) This was a new species, so it was named Tetrameryx irvingtonensis, after Irvington. The finds were so important that Irvington was given its own place in geological time.

Mr. Bell sold the property to the State of California for the proposed interstate 680 and route 238 interchange. The State Division of Parks funded a last-minute program to rescue fossils before the freeway covered the site. Then, the bulldozers moved in and leveled the area. The concrete lanes were laid, and one of the greatest fossil deposits in the world was sealed over.