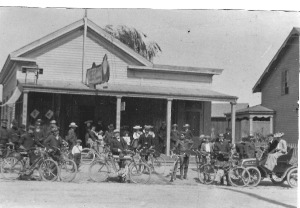 The entry includes photographs of the villages/towns in the township. The Union City area has a picture of the demolition of the Holly Sugar factory smoke stack (1977) in Alvarado and a picture of the Masonic Home built in 1898 in Decoto. The maps include Alvarado (1876) and Decoto (1910).

The Newark map is from about 1910 and the picture is of Candy Annie’s Store.

Pioneer artifacts include: A membership certificate presented to Elias Beard, as a member of the Society of California Pioneers. In the case is a gun powder horn used by Blacow family members and a gunpowder case.

John C. Fremont related items include: a drawing of John C. Fremont, two books about his life, photos of flags from 1853 including the US flag, the California flag, and the flag that John C. Fremont used on one of his expeditions.

A cartoon caricature of Alameda County Chamber of Commerce members from the 1950s is behind the door.

John Charles Frémont or Fremont (January 21, 1813 – July 13, 1890) was an American military officer, explorer, and politician who became the first candidate of the anti-slavery Republican Party for the office of President of the United States.[2] During the 1840s, when he led four expeditions into the American West, that era’s penny press accorded Frémont the sobriquet The Pathfinder. Historians call him The Great Pathfinder.

During the Mexican American War, Frémont, a major in the U.S. Army, took control of California from the Bear Flag Republic in 1846. Frémont then served as military Governor of California, however, he was court-martialed for mutiny and insubordination. President Polk commuted his sentence and Frémont led a fourth expedition, which cost ten lives, seeking a rail route over the mountains around the 38th parallel in the winter of 1849. He retired from military service and settled in California. Frémont acquired massive wealth during the California Gold Rush. Frémont was soon bogged down with lawsuits over land claims between the dispossessions of various land owners during the Mexican-American War, and the explosion of Forty-Niners immigrating during the California Gold Rush. These cases were settled by the U.S. Supreme Court where Frémont was allowed to keep his property. Frémont became one of the first two U.S. senators elected from the new state of California in 1850. He was the first presidential candidate of the new Republican Party, carrying most of the North. He lost the 1856 presidential election to Democrat James Buchanan when Know-Nothings split the vote and Democrats warned his election would lead to civil war.

During the American Civil War he was given command of Department of the West by President Abraham Lincoln. Although Frémont had successes during his brief tenure as Commander of the Western Armies, he ran his department autocratically, and made hasty decisions without consulting Washington D.C. or President Lincoln. After Frémont’s emancipation edict that freed slaves in his district, he was relieved of his command by President Lincoln for insubordination. In 1861, Frémont was the first commanding Union general who recognized an “iron will” to fight in Brigadier General Ulysses S. Grant and promoted him commander of Cairo. After the Civil War, Frémont’s wealth declined after investing heavily and purchasing an unsuccessful Pacific Railroad in 1866. Frémont served as Governor of Arizona appointed by President Rutherford B. Hayes and served from 1878 to 1881. Frémont, retired from politics and financially destitute, died in New York City in 1890.

Historians portray Frémont as controversial, impetuous, and contradictory. Some scholars regard him as a military hero of significant accomplishment, while others view him as a failure who repeatedly defeated his own best purposes.