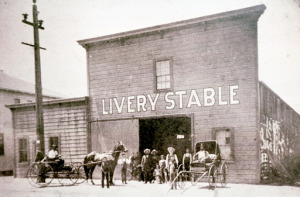 The prominent features of this exhibit are the two buggies and the livery stable wall.

Auto-Seat Top Buggy: Commonly called a doctor’s buggy, this vehicle is probably an Auto-Seat Top Buggy, distinctive and popular because of its lightness and economy, c. 1890.   The seat style is similar to that used in early automobiles. This one was rescued from a small Patterson barn. In 1994, it was refinished to its present condition.

Whitechapel Buggy: Stored in the Chadbourne Carriage House and used twice since 1916, this carriage resembles a Whitechapel Buggy and Stick Seat, c. 1885. The seat style was named for the “sticks” used in the sides.

The strong box is from Stockton or Sacramento and is said to have been used by John C. Fremont.

The Livery Stable wall includes an assortment of tack for horses and carriages: doubletree, singletree, hame, horseshoe, curry brush, straps, and halters. (A hame is one of two curved supports attached to the collar of a draft horse to which the traces are fastened.)

The Livery Stable and Blacksmith Shop 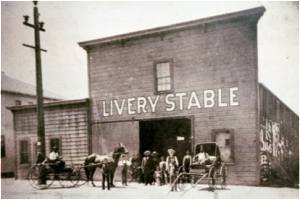 Horse travel was the most common method of transportation in the 1800s. Just as most towns today have a convenience store where travelers refuel their vehicles, the early towns of Washington Township had livery stables where travelers “refueled” their horses.

Visitors could leave their horses at the livery stable while staying in town. It was a hotel for horses where the animals were fed, watered and provided with a stall. At the livery stable people who did not own a horse could rent one. Buggies and wagons could also be rented.

Men often gathered at the livery stable to talk. It was a place where they relaxed, told stories or exchanged information and ideas. Below: the Livery Stable in Niles. 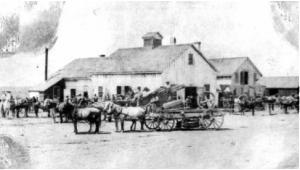 A person of great skill worked in the blacksmith shop. Blacksmiths had studied metal craft and could shape iron into tools, horseshoes and wagon-wheel rims. The ring of the blacksmith’s hammer striking the anvil and the clop, clop of horses’ shod hoofs were part of the familiar everyday sounds of a town. Below: Timothy Rix Blacksmith shop 1868, Irvington.

The livery stable and the blacksmith shop were two businesses found in the small towns of Washington Township in the early 1900s. Both provided services that people needed. Most people valued the skill and hard work required of the owners. By the mid-1900s there was no longer a need for livery stables and blacksmiths. Jobs that were once essential to a community became unnecessary as automobiles replaced horses. Garages and service stations replaced livery stables. 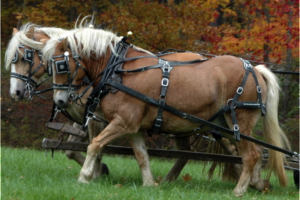 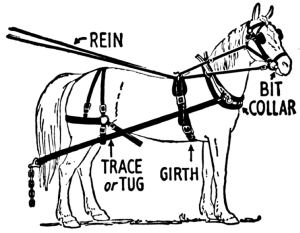 What is the difference between a singletree, a doubletree, and a neck yoke?

A neck yoke is what two horses use to hold the end of the wagon pole between them, at their chests. The neck yoke is usually held suspended from the horses’ collars or hames. It is used for steering the wagon tongue and preventing the wagon from overtaking the horses when slowing or when on a downhill grade.

A single tree goes behind a single horse and hooks to the harness and then to the load. It often has a hook on each end to fasten to the trace chains and in the center of the single tree there is often a small ring for fastening a clevis or chain, etc.

Two singletrees with one evening beam is called a “doubletree”

A neck yoke and a singletree look very similar.