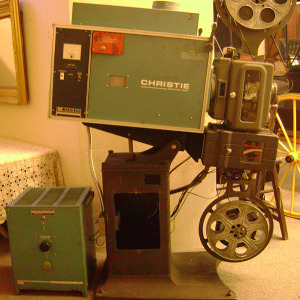 Traveling and going to a restaurant or later to movies were special types of entertainment. The curio shelf, mahogany table and display cabinet are pieces of furniture from the Alvarado Hotel. The white table was used in the International Kitchen, one of the most elegant restaurants in the area (1940-1960). The items on the table include: a dance card from the 1890s, a voting box, a photograph album, a stereoscope with pictures, a mirror from the Overacker home (located near the School for the Deaf), and posters of pictures that tell a story.

The dishes (Apple Blossom by Franciscan Ware) were sold at the international kitchen.

The projector came from the Center Theater located in Centerville.

This lovely cape of Delina’s was handed down through the family and placed on loan to the Museum of Local History in 1996. Because it was in fragile condition after being on display, the California Pioneer Heritage Foundation funded the cape’s restoration in 2011.

Zacheus Cheney was a member of the Mormon Battalion, arriving in San Diego on January 29, 1847. He later traveled north to San Francisco where he met John Horner, who persuaded him to come to Mission San Jose. Sarah Delina Cheney came to visit her older bother Zacheus, who was farming near Mission Creek.

As a member of the Church of the Latter-day Saints, Delina met another Mormon, Origin Mowry, and they were married in 1854. They had four children, Marion, Joseph, Frederick and Abbie Ann. They lived at Mowry’s Station. Delina and her husband are buried in the Irvington Cemetery.

Other exhibit items include: Furniture from Alvarado Hotel, Voter box, Table from International Kitchen (famous restaurant with gift shop in the 1940s-1960s).

Century Projector (35 millimeter) taken from the Center Theater in Centerville on Fremont Blvd. (taken app. 2006) when they remodeled the theater. Digital projection replaced this. At the time there were two-century projectors (35 millimeter) and a 16-millimeter Hortson projector in the theater.

This projector head is from the approximately the late 1960s-early 1970s. The lamp house is also from the 1960s-1970s. The sound unit and base are from the 1930s and probably original to the opening in the theater in 1947 (they may have purchased a used projector).

This unit allowed the coordination of two projectors to start and stop when changing films.

Each film reel contained about 20 minutes of film.

Built in 1946 by the Salih Family (members of the family still live in Niles) the Center Theater opened in 1947 to serve Washington Township (Centerville, Irvington, Mission San Jose, Niles, Warm Springs as well as Newark and what is now known as Union City).

Although many of these communities had smaller movie theaters, the Center Theater had the largest seating capacity of any theater in the area. It was state of the art at the time of opening. The grand marquee in neon was a beacon for the surrounding area and quickly became the icon for Centerville. The original ticket booth, located in front of the theater, no longer exists.

In the late 1960’s, new multi-screen and modern theaters began to open, including the Fox Theater at the Hub and a two-screen complex at the shopping center that is now Gateway Plaza where Raley’s is located. This caused a decline in revenue for the Center. The owners moved away from showing first run movies and began renting the theater to individuals. One such was Bill Graham, who went on to become a famous promoter of bands. The Grateful Dead used to practice at the Center Theater prior to becoming famous.

In the 1970’s, the theater was rented to a variety of operators to show second run movies and ethnic movies. It became known as the Cine Azteca. Additionally, the Rocky Horror Picture Show was shown on Saturday nights.

Later, the theater was operated under the name of the Naz Cinema. The venue showed movies from Bollywood as well as other Middle Eastern countries. It also had late night showings of Cricket matches. After the Naz moved to the Hub multi-plex cinema, it operated the theater for a few months showing classic movies and hosting concerts and comedy shows. Then another operator using the Center Theater under the name of the Park Theater showed Middle Eastern movies as well as cricket matches.