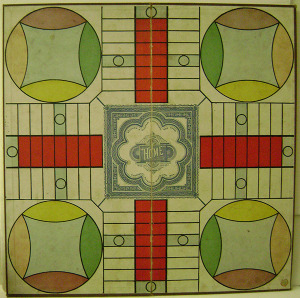 This cabinet holds collections of commonplace items from the early 1900s.

The bird egg collection was a popular hobby in the Victorian times. Michael J. Overacker’s 1880s collection of eggs range in size from ostrich to hummingbird. Michael’s father, Howard Overacker came to Washington Township in 1853 where he settled in Centerville and became a farmer.

The button collection was owned by Elizabeth Lowry, a member of an early pioneer family.

The Tyson cradle has an old-fashioned doll and quilt.

Mr. and Mrs. Harry Tyson presented the cradle to the Washington Township Historical society. The Tysons were one of Fremont’s earliest pioneer families.

William Henry Tyson I was born in the Cumberland area of England. He came to this country at an early age and settled in Iowa. He met and married Emaline Morrison and pursued his trade of wagon maker and wheelwright. In 1849, he and his wife and brother-in-law, Perry Morrison, joined a party of nineteen wagons and journeyed to California.

They saw the sad remains of the Donner Party during their wearisome crossing of the Sierras. After buying a $300 claim in Hangtown and taking out $1,000 in loose diggings, Mr. and Mrs. Tyson moved to the Mission San Jose Valley on the advice of Mr. Morrison, who praised the lovely fertile area.

Mr. Tyson bought a large claim along Alameda Creek where he pursued his dream of farming.

William and Emaline’s eldest son, William Henry II, was the first white child whose birth was recorded in the Niles area; he was one of five sons and three daughters.

William Henry II married Jenny Bonner, and this cradle was made for their sons, Robert and Harry, who lived all their lives in Fremont.

Robert and Harry attended Anderson’s Academy in Irvington and Washington High School in Centerville. Robert was a county probation officer; Harry was a postal clerk and later a road construction supervisor for the County of Alameda.

Four generations of the Tyson’s descendants still reside in Fremont.