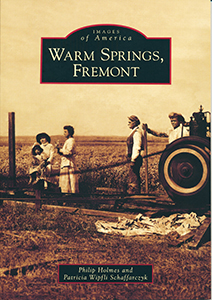 The land area of Warm springs and the warm bubbling waters for which it was named slope from just below Mission Peak to the southern part of the San Francisco Bay. Native Americans established early settlements near the springs. Rancho Agua Caliente defined the borders of the hamlet of Harrisburg, later named Warm Springs. The Warm Springs Health Resort on this land was known worldwide in the 1850s. n 1869, Governor Leland Stanford purchased the resort area as a private estate that his brother Josiah developed into a famous winery. Henry Curtner farmed large tracts of land planted in wheat, barley, and grapes…

Philip Holmes and Patricia Schaffarczyk are historians from the Museum of Local History in Fremont. Together they have assembled the images from the collections to tell the story of the once-tiny village of Warm Springs and nearby Dumbarton.