These are the years of rapid development, growth, and change. It was a time of transformation from a rural community of small towns to a suburban city – Fremont. Building the city included creating the city center, Central Park, city hall, city services, major thoroughfares, shopping centers, transportation (i.e., freeways, buses, BART), housing developments, schools, and parks. 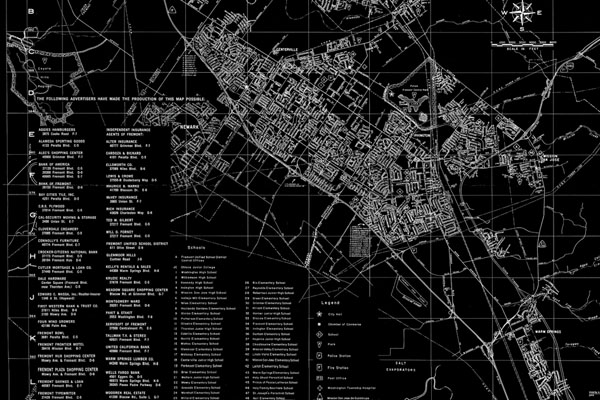 1968 Map of Fremont and some portions of Newark, Alameda County, CA
Drawn by A. Greger
Put out by the Fremont Chamber of Commerce
Dated: June 1968
(used as background on this box) 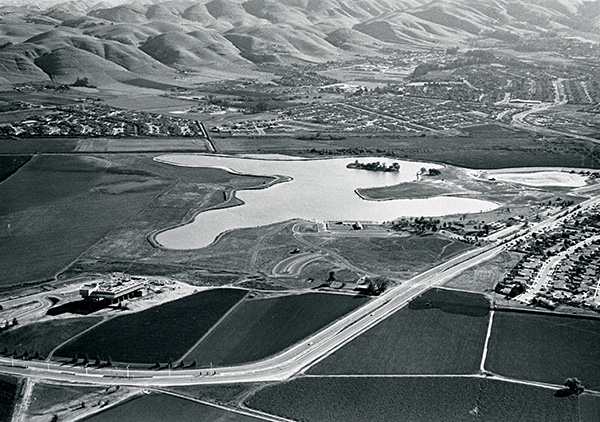 Aerial view of of Lake Elizabeth, 1969 (CL1)
Theodore ‘Ted’ Harpainter graduated in Landscape Architecture from the University of California, Berkeley in 1950, and was hired to develop parks for the City of Fremont in 1959. Gifted as a painter, he retired at a young age in 1979 and moved his studio to San Luis Obispo County where he still paints today. Lake Elizabeth might be a lobed leaf-shape by Matisse; set off by Ted’s dramatic double allée of poplars, wind-tossed daily as in a Van Gogh painting and silhouetted against Mission Peak. 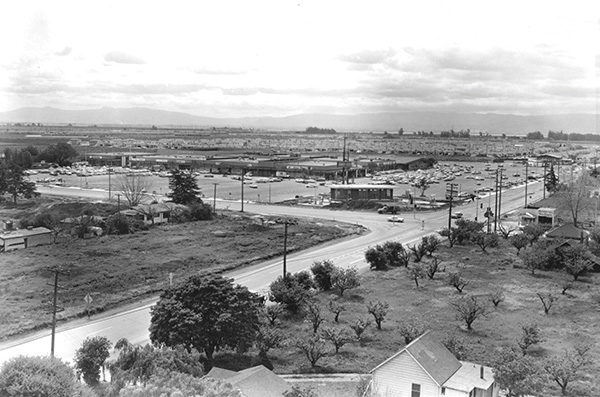 The Hub Shopping Center, City Center, 1962 (CL2)
This aerial photo if the newly constructed “Hub”, built on land which was previously owned by Burdette Williams, a prominent farmer, who came to the area in 1900. Before that, the farm was owned by the Chadbourne family and once was the home of the Cloverdale-Innes Dairy and milk delivery business, run by the Bauhofer family.

The main road crossing from the lower left to the upper right is Mowry Ave. (formerly Santos Road) heading toward the Bay. The other street is Fremont Blvd., also know as Highway 17 at the time. There is a small service station on the corner across from the “Hub” and a portion of an apricot orchard is seen in this photo. 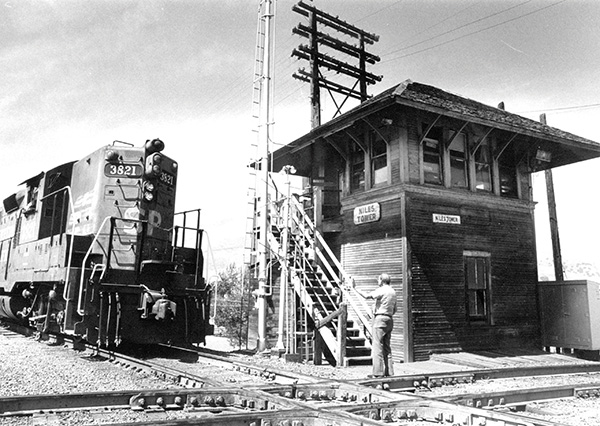 Niles Interlocking Tower (CF1)
Niles Interlocking Tower, built in 1912 by Western Pacific, handled the several intersecting railroad lines on the south bank of Alameda Creek. Orders were relayed from Roseville to direct the freight; over 50 trains a day at the peak. This protocol was replaced by Direct Traffic Control (DTC) in 1984. The much-loved tower was destroyed in 1986, but the Niles Tower sign survives in private hands in Niles today. 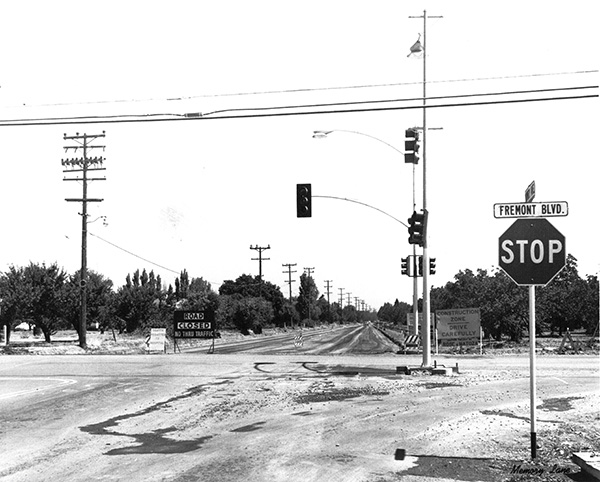 Fremont Blvd. and Mowry Ave. intersection under construction, City Center, 1961 (CF2)
Shortly after Fremont incorporated in 1956, Centerville’s Main Street became Fremont Blvd. and Mowry Ave. was extended toward Niles (incorporating the former Santos Road and part of Peralta Blvd.) Washington Hospital, which opened in November of 1958, was taking shape and was largely surrounded by orchards and cauliflower fields. Note the sign on the left: “Traffic permitted to hospital.” 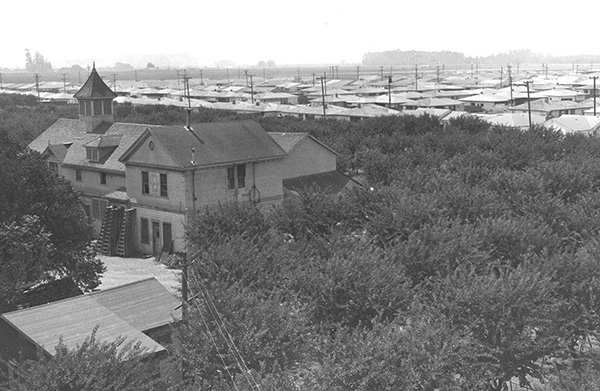 Sycamore Farm, 1960 (CF3)
This view toward the new subdivisions adjacent to Sycamore Farm on Thornton Avenue is from the top of the old Bunting tank house around 1960. Most of the old Sycamore Farm buildings, including the mansion, burned in 1968. The area is now filled in with homes. The Bunting mansion was completed in 1900. It was the centerpiece of Sycamore Farms, owned by the Bunting family. It was sold to Clarence Kolb (radio and vaudeville star) in 1918. Before it burned, it was last operated as an apricot farm by the Freitas family. 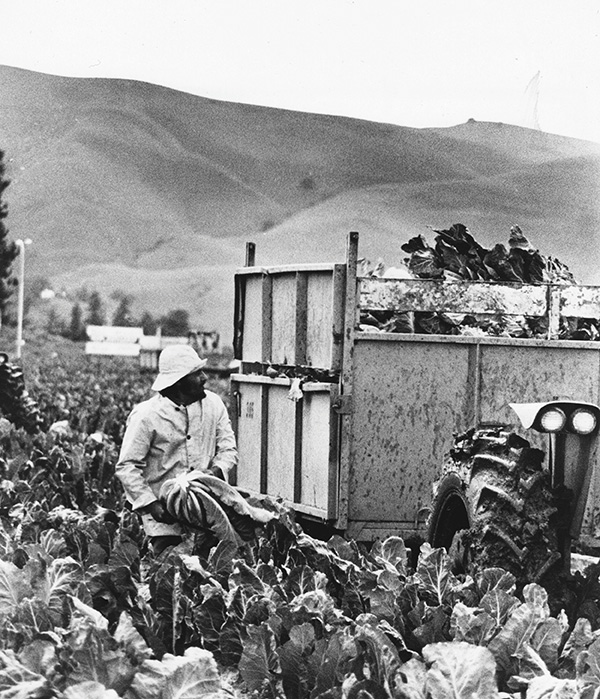 Cauliflower picking in Fremont, 1960s-70s (CF4)
In the early years of Fremont, farming was everywhere the eye could see. Here a worker is harvesting cauliflower. The hills in the background indicate it is probably near Mission Blvd., perhaps near Niles. Can you take a guess? 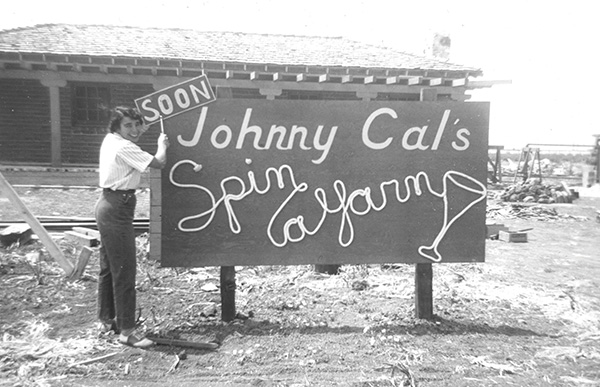 John Calcagno’s Spin a Yarn restaurant under construction (CR1)
John Calcagno, the former owner of Central Chevrolet in Centerville, purchased land on Highway 17 in 1951 and he hired local builder Randy Griffin to build a cocktail lounge. Billy Calcagno and Alberta Nunes George helped with the interior design. When John Calcagno asked Alberta to come up with a name for the lounge, she created this logo sign, naming it Spin a Yarn because Calcagno was a great storyteller. 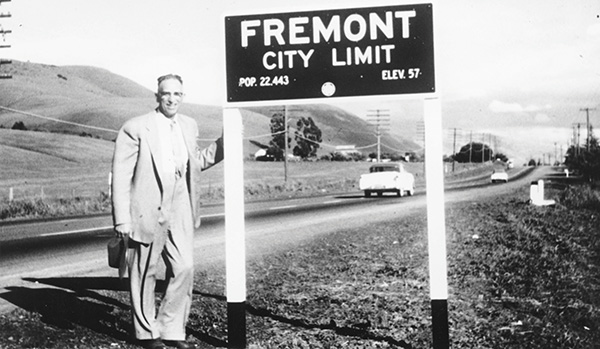 Fremont population at incorporation, 1956 (CR2)
The population stood at 22,443, elevation 57 – Here stands a Fremont entrance sign at Niles. The population expanded tenfold over the next five decades and filled these orchards with homes. Maurice Marks, standing beside the sign, was a member of the incorporation committee that worked to form the city that became Fremont. Marks was the Chairman of the Name Committee. This picture is taken at today’s Shilom Drive and Mission Blvd at the border of Union City and Fremont. 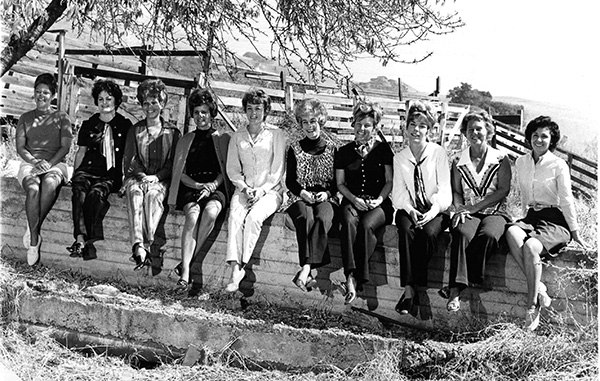 In January, 1969, a small group of women wanted to put their talents to charitable use. They had one goal in mind: Find a way to raise money to build a YMCA building in Fremont. Dorothy Pegueros, Betty Sabraw, Anita DeDomenico, Sumi Lampert and Flo Aragon formed the first board of this new organization, calling it the Candle Lighters. They were soon joined by many others, including Mary Emerson, Jane Bell, Roberta Gullick, Liz Mertins and Margaret Reiner. These women were the first Candle Lighters.

Anita’s proposal of a “Ghost House” captured everyone’s enthusiasm. They talked a local printer into designing the now well-known Candle Lighter logo. (In the Candle Lighter tradition, he was talked into donating his time.) They were official then. And the very first Candle Lighters Ghost House became a reality that October in an old brick winery located on what is now the Ohlone College campus.

Little did this group of women realize they had started a local Halloween tradition that has raised well over $1.5 million for a wide variety of community projects in the Tri-City Area. An early newspaper article described the group as “What promises to be the most spirited and enterprising women’s group on this side of the Bay.” How right they were! (Information borrowed from http://candlelighters.com/history/) 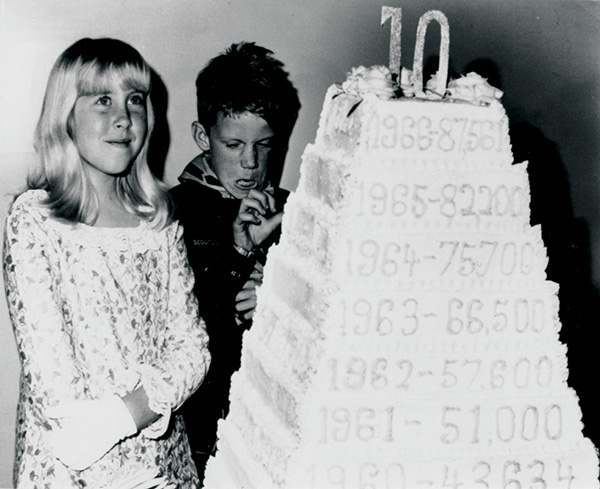 Fremont 10th Anniversary Cake, January 23rd, 1966 (CR4)
Fremont’s 10th anniversary celebration spanned the entire year with festivities. It included the ground-breaking ceremony of the new city hall and the dedication of five neighborhood parks. The 10-layer birthday cake included the population increases over the years. Do you recognize the onlookers? Please contact the museum if you know their names. 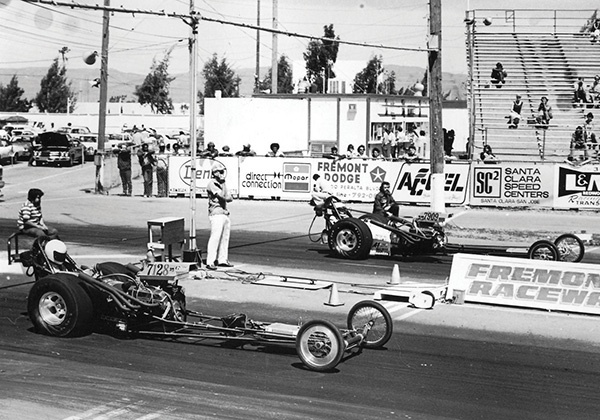 Fremont Raceway, 1964-65 (CB1)
In the late 1950s, Ron Lawrence partnered with several people and proposed constructing a quarter mile drag strip off Durham Road, next to the Fremont Skysailing Airport. Once approved, a pair of perfectly straight paved roads of nearly ¾ of a mile long appeared in the fields. The support facilities were built, and once the place became sanctioned by a national race association the Fremont Drag Strip was open for business.

From the beginning the drag strip was the scene of world record runs by national champions. The drag strip was also in the movies, including the film American Graffiti II. This put Fremont on the map for close to 30 years. Today, the former drag strip is part of “The Block” at Pacific Commons. 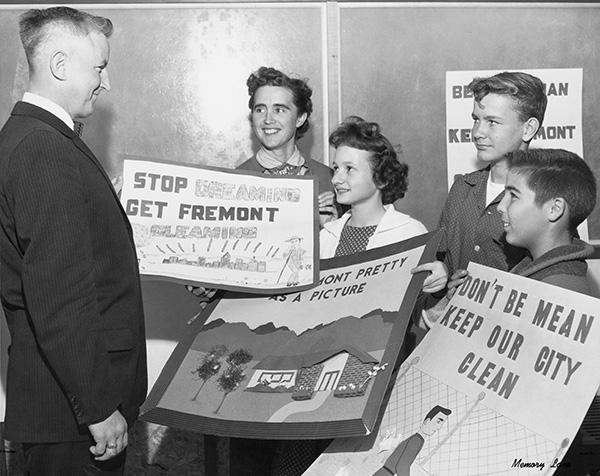 Fremont City Beautiful Poster Contest Winners (CB2)
The Fremont City Council decided that it would be helpful to have an advisory committee to assist them with protecting and developing the new city. Resolution No. 44 established the City Beautiful Committee. Once established, the members worked to control billboards, overhead wires, unsightly structures and general beautification of the city. They worked with the design of city limit signs, and adopted a tree preservation program that produced the first Landmark Trees Publication. The committee also reviewed the names of streets, and encouraged planting of trees. The last committee members were appointed in 1977, and in 1983 the committee was disbanded. Perhaps it was too expensive? 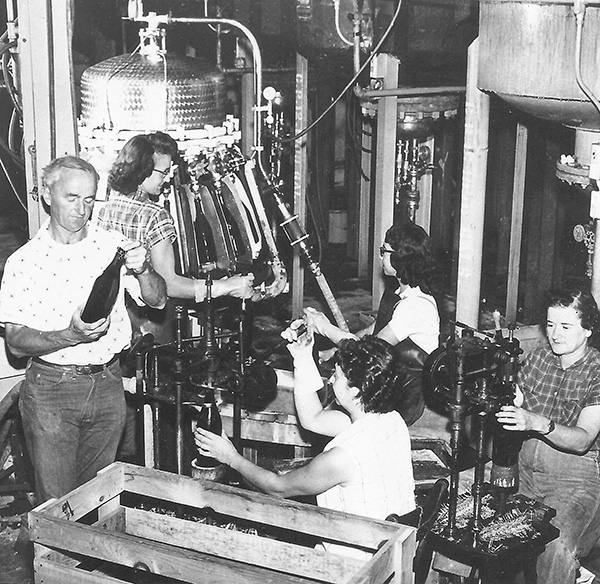 Inside winery production at Weibel Vineyard, Warm Springs (CB3)
New winemaking equipment was installed in 1945 and the first champagne from the vineyards was marketed in 1952. During the 1960s, the Weibel winery produced more champagne than any other producer in California and had won over 650 awards. Pictured is winemaker Oscar Habluetzel, brother-in-law to Fred Weibel, checking the champagne bottling process. One woman is running the bottling machine, one is corking, and another is wiring the top of the bottle and attaching foil. 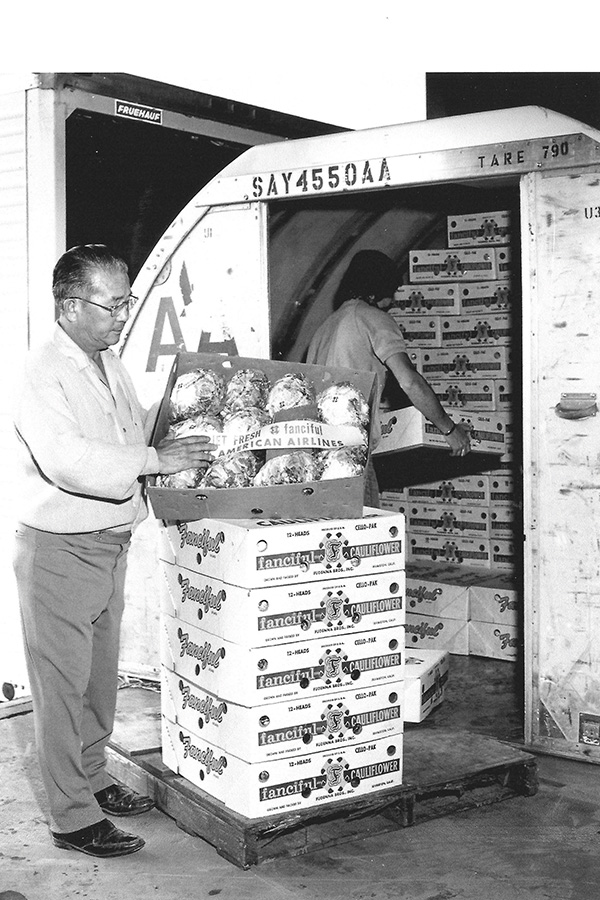 Loading cauliflower crates for shipment (CB4)
James Fudenna is shown helping to load crates of produce for shipment on an American Airlines airplane. The Fudennas had a packing shed operation in Warm Springs. They distributed farm produce, especially lettuce and cauliflower, across the United States and around the world. 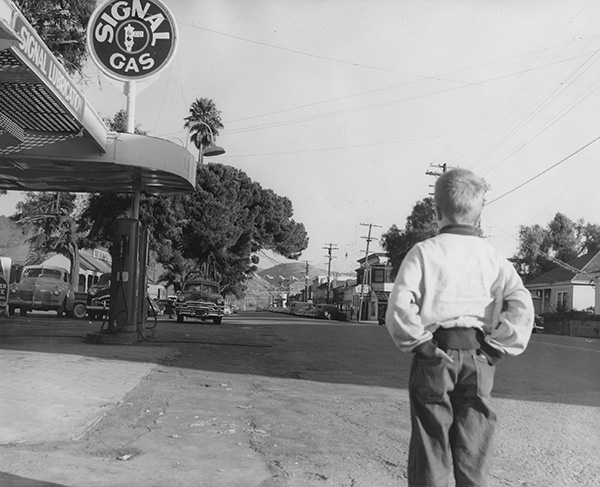 Downtown Niles, 1953 (CT1)
Young Ken Gittings with the family car on the left parked at the Signal service station. Ken’s parents, Harriet and Dale Gittings, moved to Centerville in 1950. Harriet worked as a reporter for the local newspaper. They bought a home in a new development called Park Homes. It was located on the corner of Blacow Rd. and Thornton Ave. and it replaced a former apricot orchard. The development offered two and three bedroom homes for up to $7, 895 with VA and FHA financing. The family may have been visiting Niles when this picture was taken. 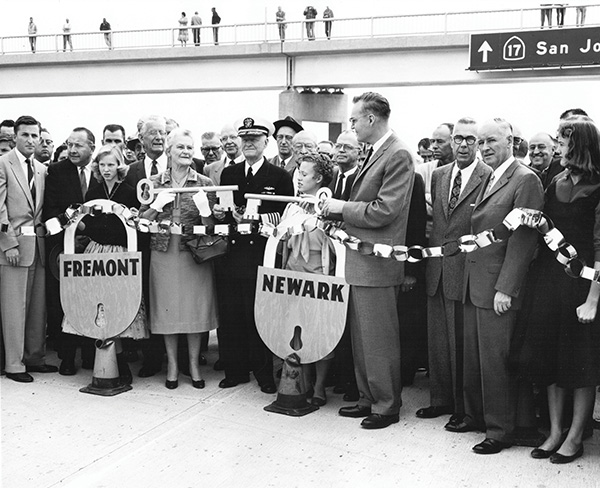 Dedication of the Nimitz Freeway – I-880, November 24th, 1958 (CT2)
In 1947, construction commenced on a freeway to replace the street routing of State Route 17 through the East Bay. The new freeway was named the Eastshore Freeway, and with the subsequent addition of a freeway to replace the Eastshore Highway north of the MacArthur Maze in the mid-1950s, it ran, appropriately, almost the entire length of the east shore of San Francisco Bay. In 1958, following a joint resolution of the California State Legislature, the portion south of the MacArthur Maze was renamed the Nimitz Freeway in honor of WWII Admiral Nimitz, while the portion to the north retained the name Eastshore Freeway.

The last section of the freeway was dedicated on November 24th, 1958. Admiral Nimitz and many officials were in attendance. Admiral Nimitz is pictured here at the ribbon cutting ceremony with Fremont and Newark city officials. This was taken at the Mowry Ave. off-ramp looking south. Notice the sign in the background. 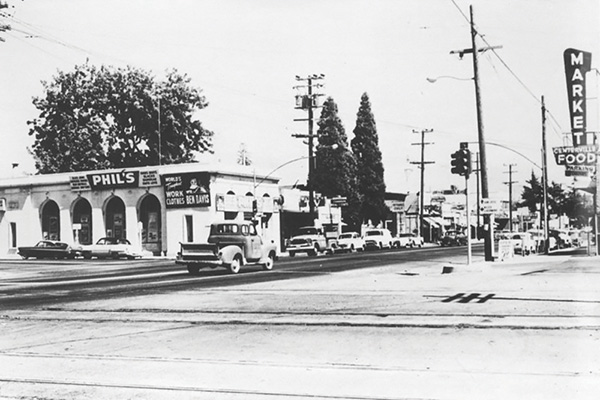 Centerville Main Street, 1959 (CT3)
Centerville was a bustling town center in 1959. Here the former Centerville Bank is home to Phil’s, Ben Davis, Walton’s TV, and Cardoza Real Estate. The Centerville Food Market is across the street.