Fremont has always been a diverse city, but as Silicon Valley expanded into Fremont with new, developing technologies, bio-tech and hi-tech, the population increased in number from 100,000 to 201,00, with residents representing 155 countries and speaking 135 languages. The city became a United Nations City, and thus began the new balance of celebrating the city’s heritage while also embracing new neighbors. 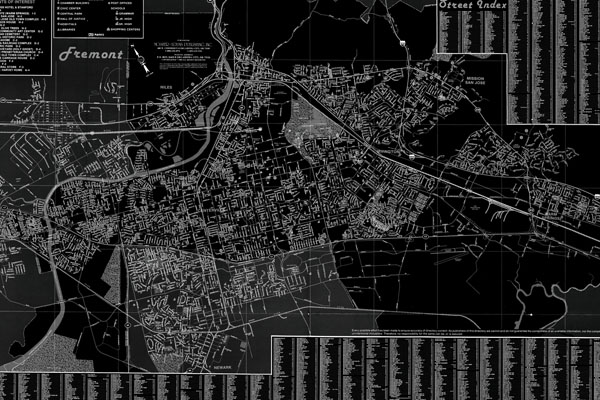 1984-85 City Map of Fremont and some portions of Newark and Union City, Alameda County, CA
Published by Mosher-Adams Publishing, Inc., Oklahoma City, OK
Put out by the Fremont Chamber of Commerce
Dated: 1984
(used as background on this box) 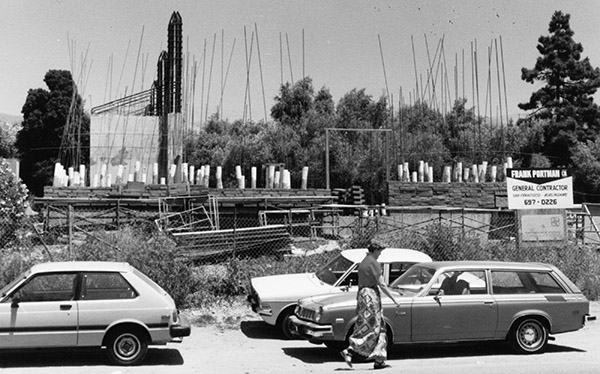 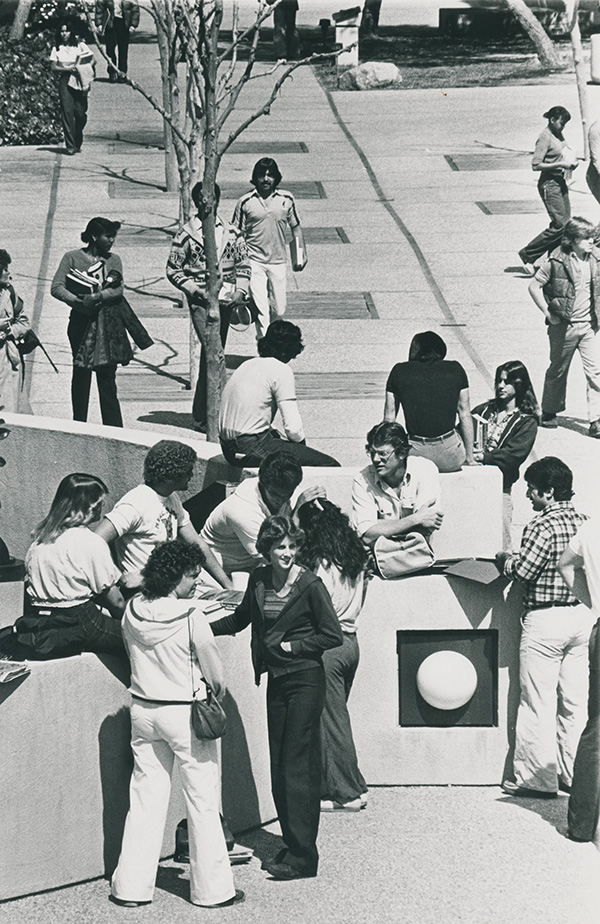 Ohlone students hang out on campus, 1970s or 80s (DL2)
Ohlone College opened for classes at the Serra Center (off Washington Blvd.) in 1967. Later, in 1974, the new Ohlone campus on Mission Blvd. opened to students and faculty. Here students are enjoying the relaxing atmosphere of the quad area in the new, attractive, modern campus. 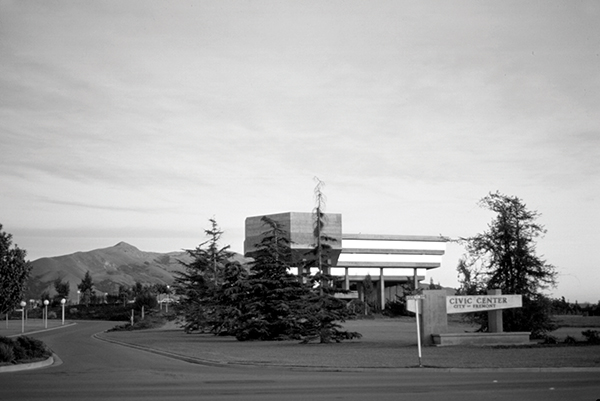 City Hall, 1995 (DL3)
The new Fremont city hall was completed in 1968. It served the city well until the city offices and the police station were relocated due to seismic issues. City hall was located next to Lake Elizabeth, near today’s Fremont Main Library. The landmark building was demolished in 2004. 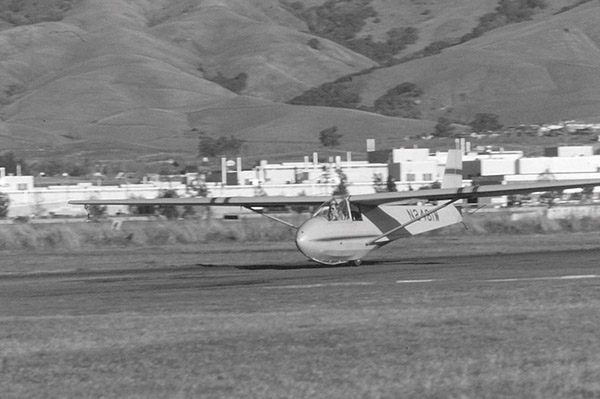 Sky Sailing Airport or Sky Soaring (Glider) Airport (DF1)
Located between the 880 freeway and Cushing Pkwy. at the south end of Christie St.
Originally, the area was an auxillary landing strip for the Navy, an area used for training during world War II. By 1962, it was a glider strip called Sky Sailing Airport. In the 1970s and 80s Sky Sailing was one of the busiest glider operations in the U.S. with up to 15,000 launches a year. In 1988, the airport changed ownership and its name to Sky Soaring Airport. With development of the property (Pacific Commons) on the horizon and because of added safety concerns, the last flight at the airport took place on November 6th, 1991. 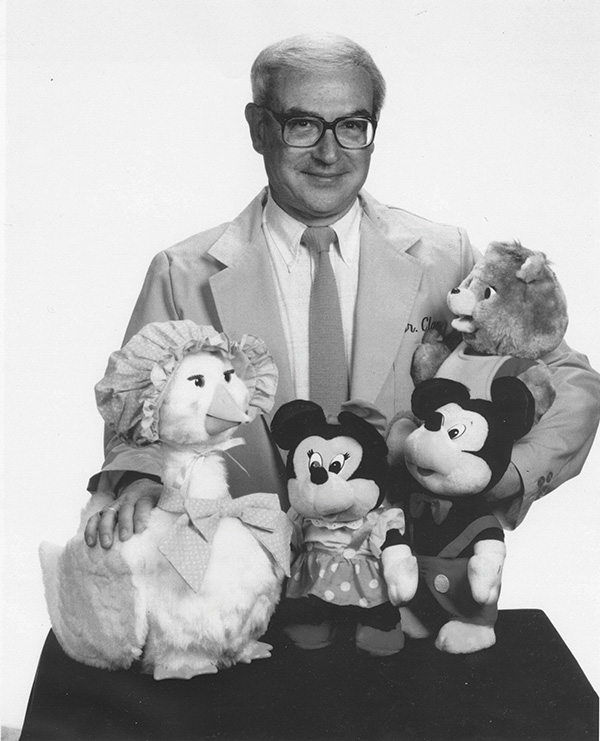 Clay Pimentel (aka Dr. Clay), 1980s (DF2)
Clay Pimentel oversaw the Worlds of Wonder consumer department and served as the company’s Goodwill Ambassador. Known affectionately as “Dr. Bearwell,” Clay and his staff ensured that each WOW toy owner had a rewarding experience and that the company continued to provide wholesome entertainment throughout its product line. Children may remember taking their broken Teddy Ruxpin toys to his “hospital” to be fixed. 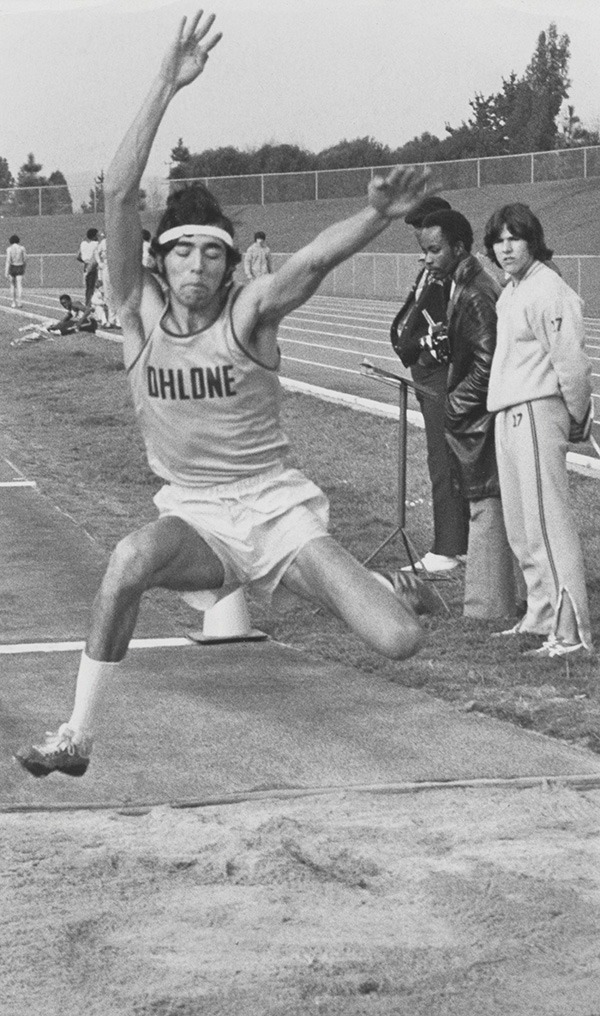 Ohlone track and field in action, 1970s or 80s (DF3)
The Ohlone athletic teams were named the Saints when the first campus opened in 1967. Two years later, they voted to rename the teams the Renegades. Track and Field events were organized within the first year of the school opening at the Serra Center on Washington Blvd. The new Ohlone campus opened in 1978. 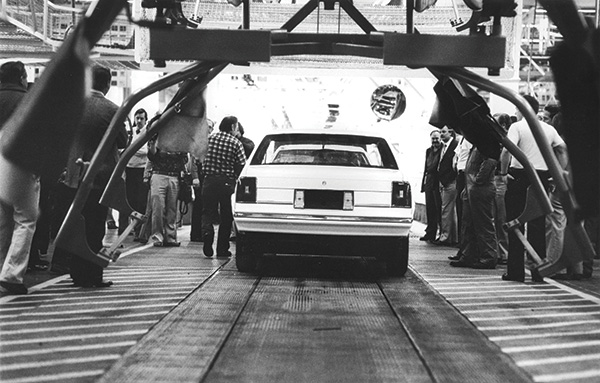 The last car rolls off the line at the General Motors Plant before closing for good, March 4, 1982 (DF4)
The General Motors assembly plant, the largest auto plant west of St. Louis, opened in 1962. Four different makes of cars were produced at the plant and a parallel line produced trucks. At its peak, 6,800 employees worked at the plant. Labor troubles and a struggling economy brought a decline in production and the last car produced was a white Oldsmobile Ciera. The plant closed on March 4, 1982. Two years later, in 1984, the plant reopened under new ownership. It was now the New United Motor Manufacturing, Inc. (NUMMI) Plant, a corporate venture of Toyota and General Motors. 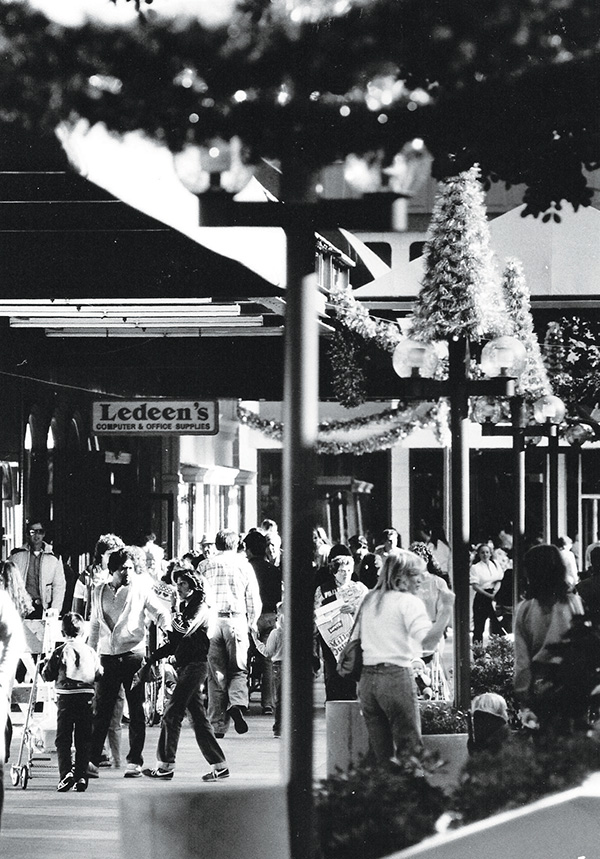 Hub Shopping Center in December (DR1)
Holiday shoppers flocked to The Hub in the 1980s. Ledeen’s Computer and Office Supplies can be seen in this photo. 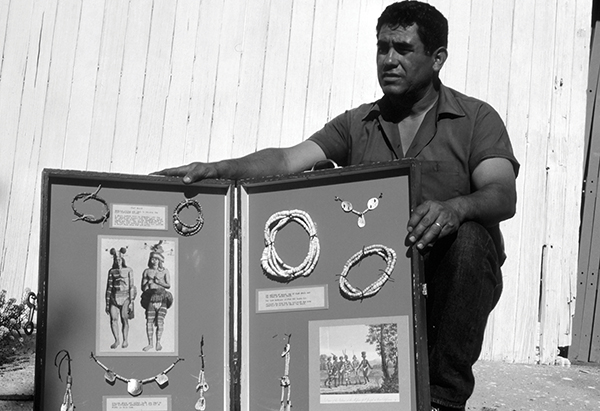 Phil Galvan, Ohlone native displays traditional Ohlone jewelry during a talk, 1980s (DR2)
Phil Galvan and his family are descendants of the Ohlone natives. The records of Mission San Jose trace their ancestral lineage to the laying of the cornerstone of the first Mission buildings by Phil’s great-grandfather, Chief Tarino. The Galvan Family and others continue to serve as caretakers for the ancient burial grounds (the cemetery) along Washington Blvd. Phil Galvan has passed his knowledge on to his son, Andrew A. Galvan, who still gives talks to educate others about the people who were on this land before Europeans arrived. 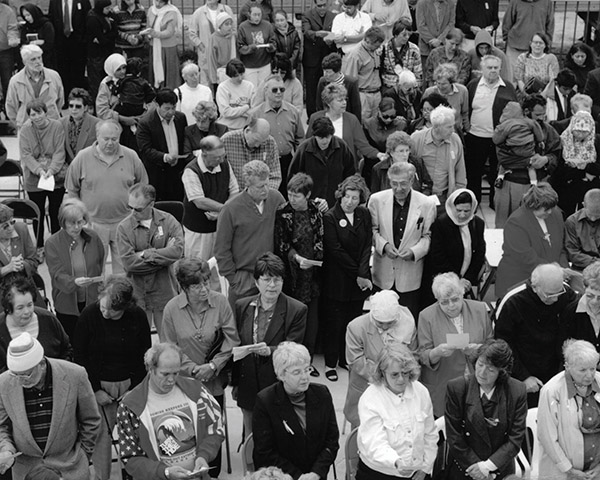 Post 9/11 interfaith gathering, September 15, 2001 (DR3)
The weekend after the attacks on the Twin Towers in New York, the people of Fremont gathered in Central Park to honor the victims of the Sept. 11, 2001 terrorist attacks. People of many faiths and in all walks of life converged on the park to light candles and stand together in silence. This ceremony was organized by the Tri-City Ministerial Association. 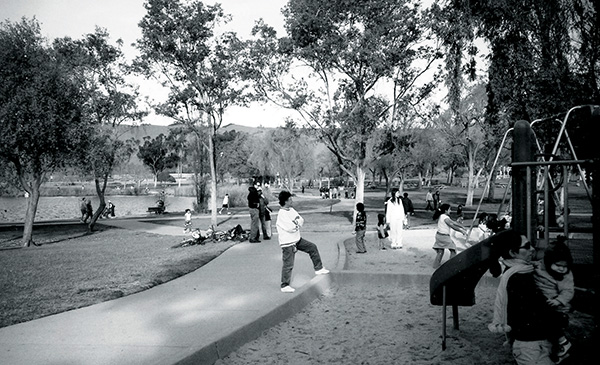 Families play at a Central Park playground, 1987 (DB1)
Central Park was developed over many years. The purchase of the land began in 1962 with just 12 acres and by 1983 had increased to 450 acres. The first buildings erected in the future park were the Community Center (1962) and the old library (1966). Playgrounds have been improved upon over the years, but they continue be a main attraction of Central Park for families. 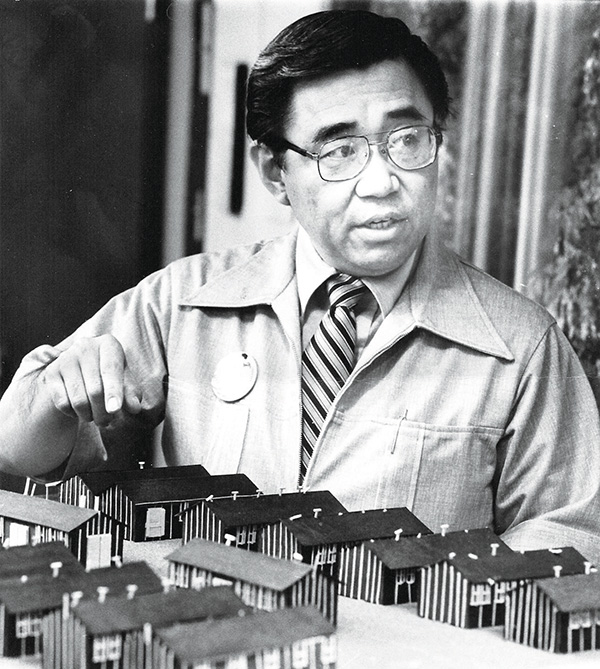 Dr. Walter Hashimoto, Centerville (DB2)
Dr. Walter Hashimoto describes life in the Japanese internment camps from 1942 to 1945 in an interview around 1980. The Hashimoto dental office is still on Martha Avenue, where Dr. Elmo Grimmer also opened his dental office after his military service. The Martha Avenue business center also housed a courthouse for Alameda County at one time before becoming the New Horizons School in 1988. 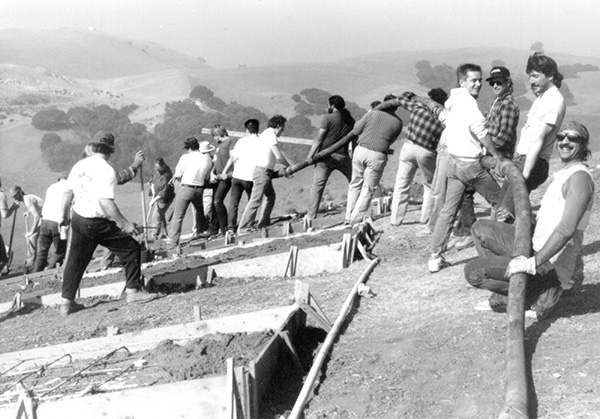 Reconstruction of N-I-L-E-S landmark letters, 1990 (DB3)
The work was completed by Niles volunteers, led by Paul Figoni. Forms were built, rebar positioned, and a full scale concrete truck came from Hayward to pour the gargantuan letters. Pilots still use this landmark to instantly verify their location. The panorama of Niles and the greater Bay Area stretches below. On a clear day, you can still see Mount Tamalpais visible on the north horizon. 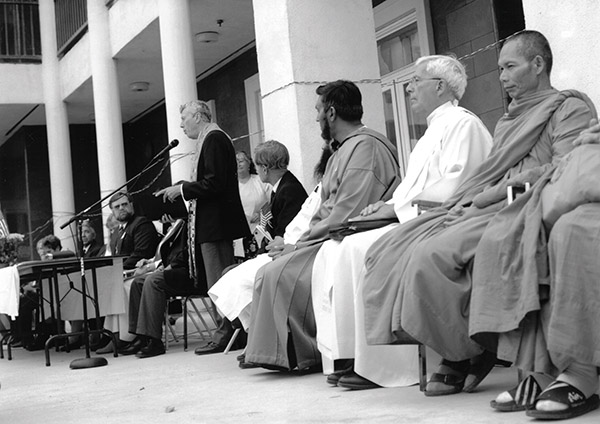 Post 9/11 interfaith gathering, September 15, 2001 (DB4)
The weekend after the attacks on the Twin Towers in New York, the people of Fremont gathered in Central Park to honor the victims of the Sept. 11, 2001 terrorist attacks. People of many faiths and in all walks of life converged on the park to light candles and stand together in silence. This ceremony was organized by the Tri-City Ministerial Association. 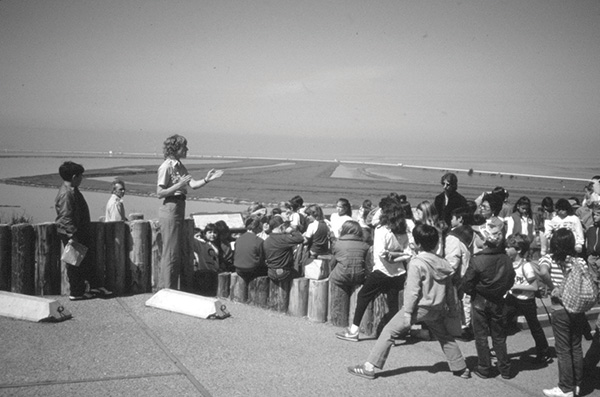 Congressman Don Edwards, responding to local citizens who made up the South San Francisco Baylands Planning, Conservation and National Wildlife Refuge Committee, worked with Congress to create the San Francisco Bay National Wildlife Refuge. This group later became the Citizens Committee to Complete the Refuge, and in 1988 the committee helped to add an additional 20,000 acres, doubling the size of the refuge. The Citizens Committee to Complete the Refuge, along with other Bay Area organizations, works tirelessly to protect and enhance the Bay’s remaining wetlands. 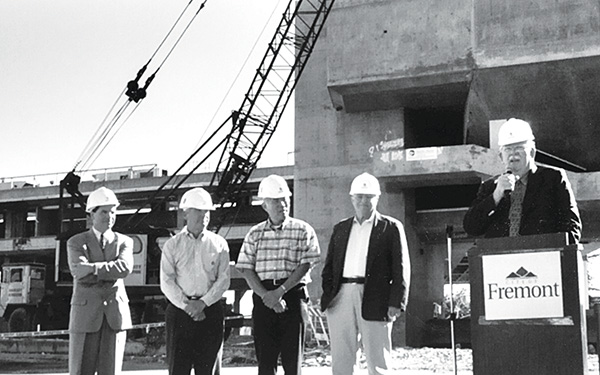 Chip Off the Old Block Ceremony for Old City Hall, September 2004 (DT2)
The City of Fremont had a special ‘Chip off the Old Block’ ceremony on the day that demolition of the old city hall officially started. The structure had long been paid for, but the city government was ready to move on from its flagship building as a result of new seismic reports. Left to right: Dominic Dutra, Bill Pease, Steve Cho, Bob Wasserman and Mayor Gus Morrison.