Before 1920, the geographic area that would later become Fremont was made up of small towns. The small towns were built to support the farms and dairies that surrounded them from the 1870s to about 1920. Washington Township, as the area was then known, was the political entity that included today’s Tri-City Area. This included the towns of Decoto, Alvarado, Newark, Niles, Centerville, Irvington, Mission San Jose, and Warm Springs. Five of those eight towns became Fremont. 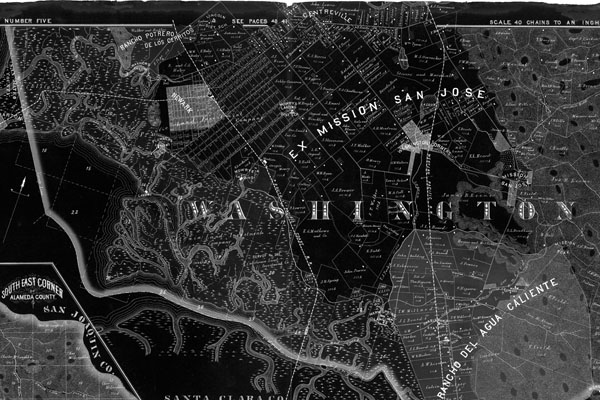 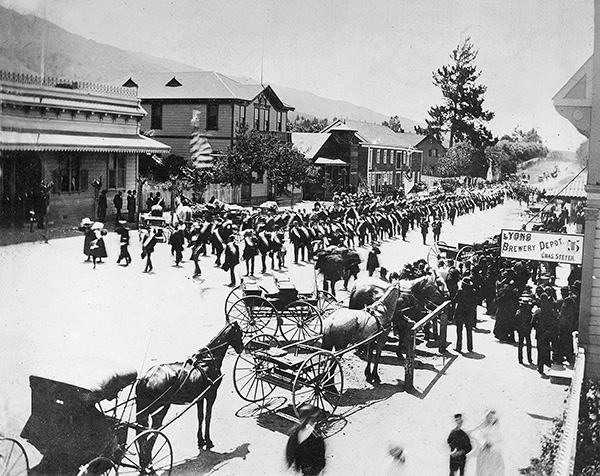 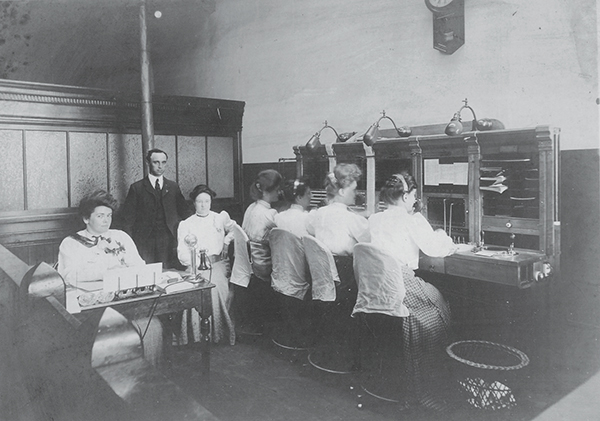 Stevenson Center telephone office (AL2)
Kate Little Stevenson is on left. John Thomas Stevenson and his wife, Jane, came to the area in 1852. They lived in a one-room log cabin owned by E.L. Beard and finally saved enough money to buy a 380-acre ranch north of Centerville between the Alvarado Road and Alameda Creek (pictured). The ranch prospered and expanded to include the area presently occupied by American High School and the Brookvale Shopping Center and housing development. 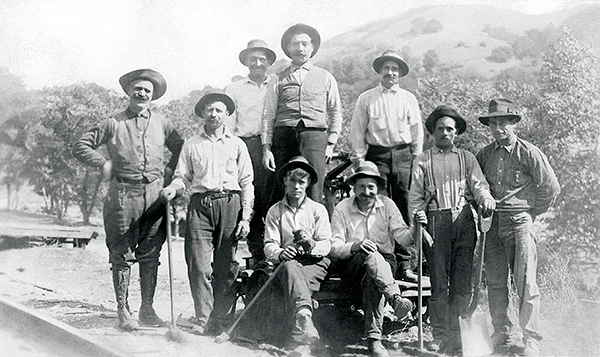 Railroad linemen in Niles (AL3)
The census in the early 1900s lists Irish and Portuguese railroad workers as linemen. Until at least 1905, Jeremiah Daniel Lynch was the section boss for the crew that built and maintained tracks for Southern Pacific around Niles. Michael Houlihan emigrated from Ireland in 1854 and worked on the railroad into his seventies. His Queen Anne-style house may still be seen today at 37664 Second Street (Niles). 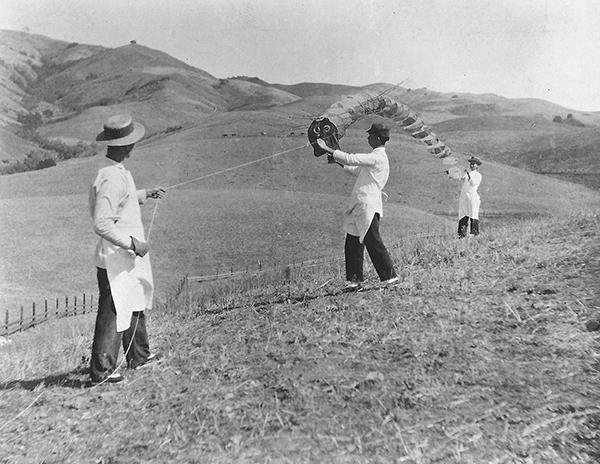 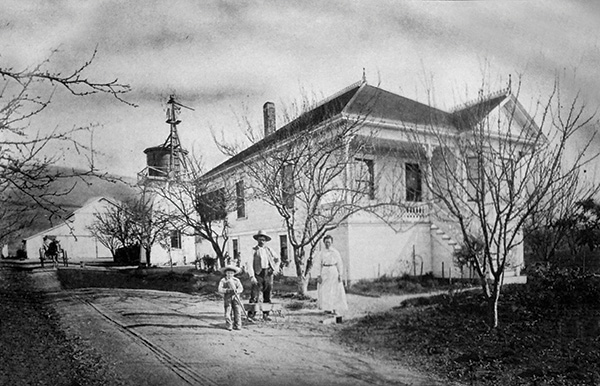 Silva Farm, Warm Springs (AF1)
Antone Manuel Silva and his wife, Louisa, with their son, Douglas, are pictured on this porcelain photograph that shows the Silva Farm with the house, tank house and barn. Antone and Louisa were from the Azores, Portugal. Antone purchased 12.45 acres for a fruit farm in 1905. 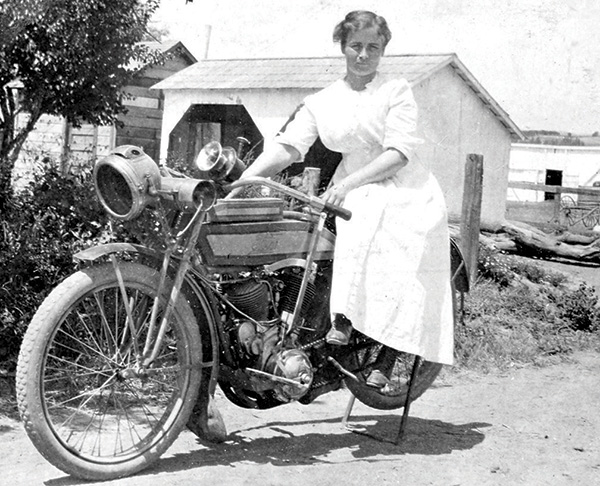 Rose Geary on motorbike, 1912 (AF2)
The Geary family, of seven children, lived and worked on a dairy farm in Irvington (near Irvington Square) from about 1900-1920. Rose, the eldest daughter, is atop a visitor’s motorcycle. The farm buildings can be seen in the background. 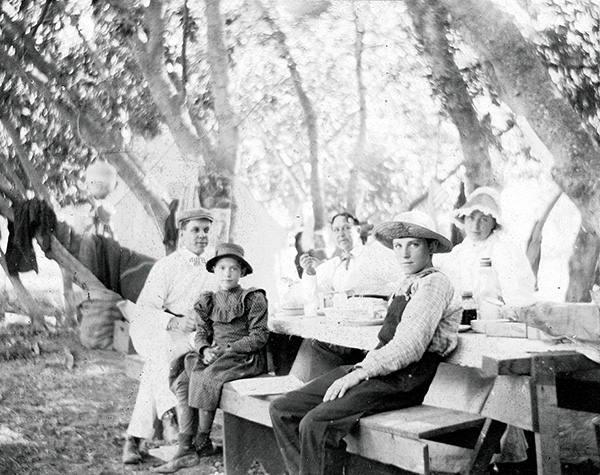 Picnicking at Niles Canyon (AF3)
Families picnicked and camped in many places along Alameda Creek in Niles Canyon. Pictured are members of the Mayhews family enjoying the shade of the sycamore trees. 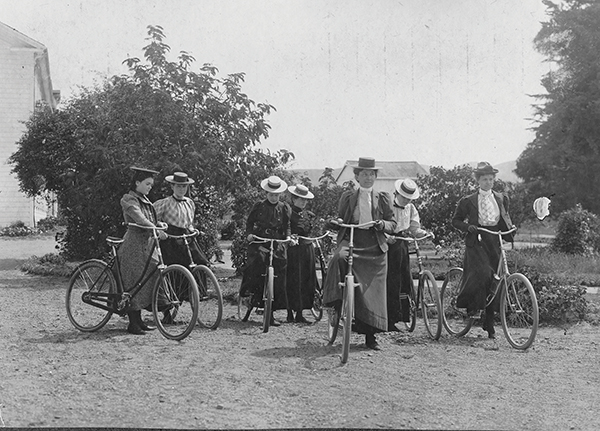 Ladies on bicycles at Curtner Seminary, Irvington, circa 1900 (AF4)
In the 1890s “a cycling craze” offered a new kind of mobility to many young women. Bikes facilitated unchaperoned outings and some women wore bloomers, widely seen as indecent. Another charge against the cycling craze was that people were spending their Sundays — often the only work-free day of the week — on bike rides rather than at church. 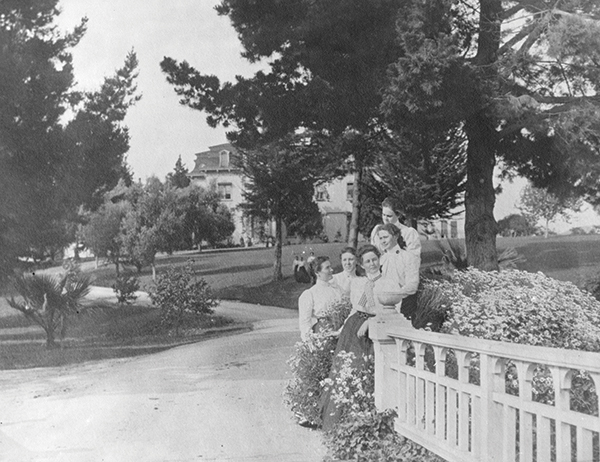 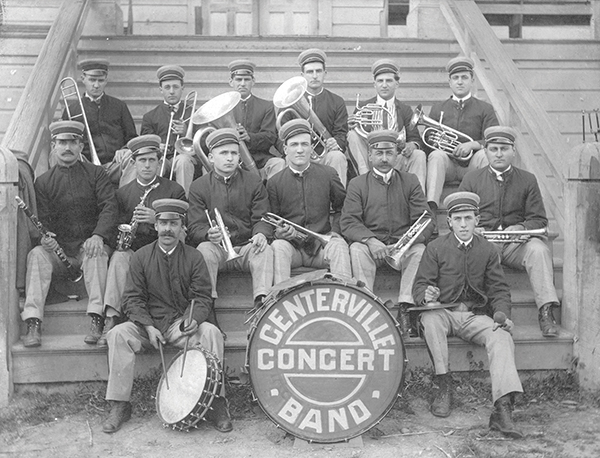 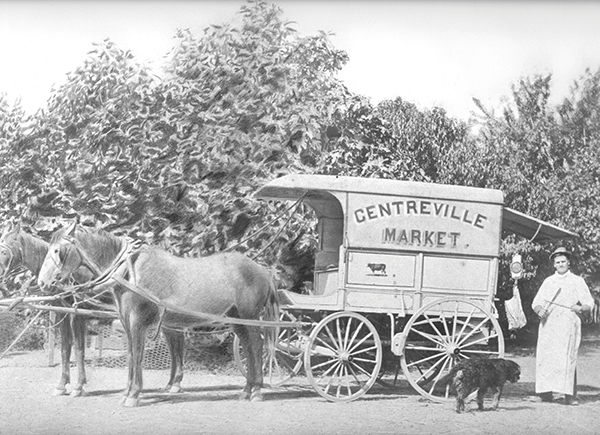 Centerville market wagon and horses, with the butcher behind wagon, 1900 (AR2) 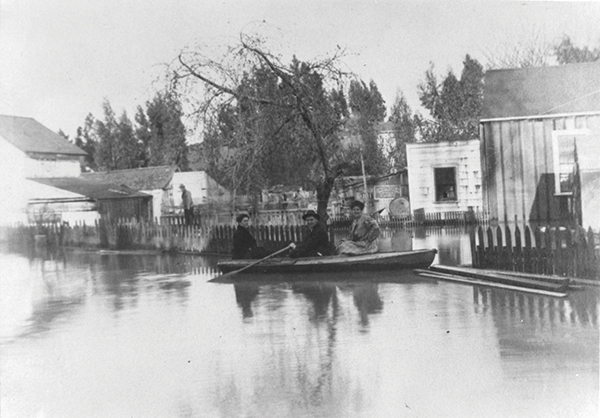 Seasonal flood in Irvington with women in a boat, 1905 (AR3)
During peak rain events, the creek from the lagoon (now the Lake Elizabeth area) often flooded where it connected with the creek that ran through the old college, near today’s Washington Blvd. 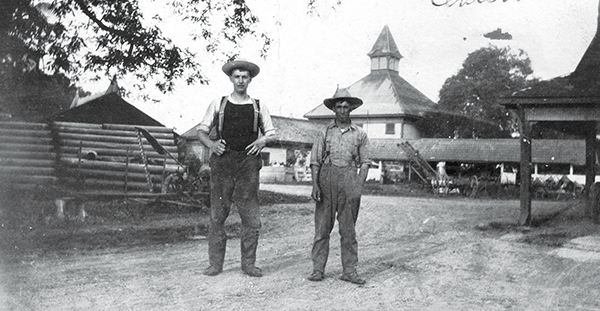 Workers at Innes-Cloverdale Ranch in Centerville with the carriage house in the background. (AB1)
The Bauhofer family moved to Centerville from Alameda in 1927 to operate the Innes-Cloverdale Dairy on the Chadbourne Ranch, later the Williams ranch (located at today’s Fremont Hub on Mowry Ave. and Fremont Blvd.) The Chadbourne Ranch had been established before 1878. Every fall, the annual Candle Lighters Ghost House operates out of the old carriage house. 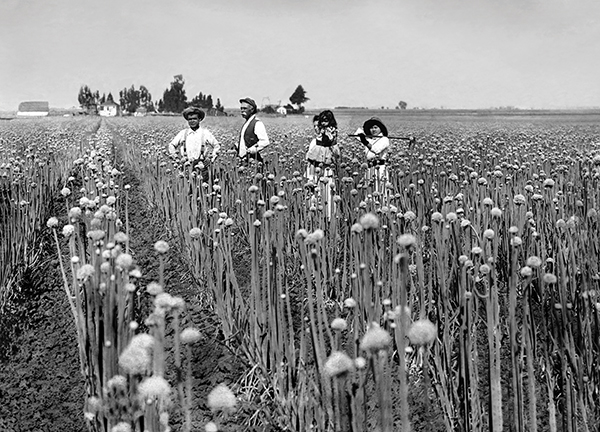 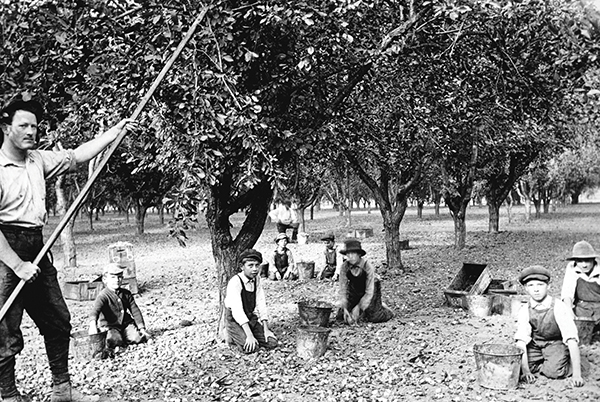 Harvesting almonds (AB3)
The Washington Press printed a special “Progress Edition” of the newspaper in Niles on March 4th, 1916. One section one was entitled ‘California, Land of Opportunities.’ It was noted that the township was a basin in what was known as the Santa Clara Valley and had nearly 100,000 acres of farmland. The rich soil produced a variety of crops including apricots, peas, apples, oranges, lemons, olives, almonds, walnuts, grapes, prunes, strawberries, sugar beets, vegetables and a variety of grains. 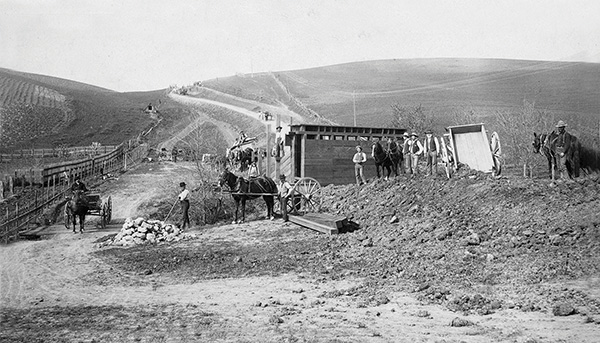 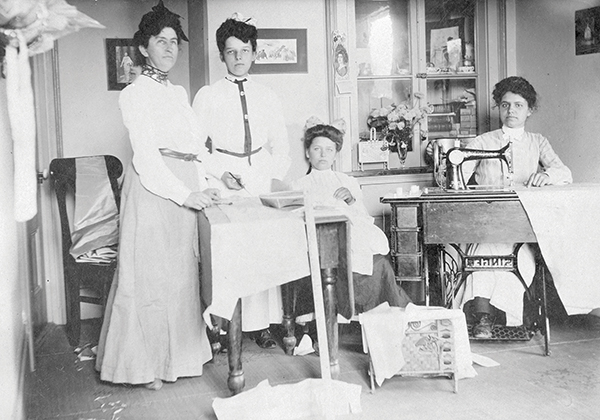 Ladies Sewing Circle (AB5)
Sewing circles were very popular in Washington Township. They provided a place for women to gather to make items for worthy causes. This sewing circle in Centerville includes Rose Pires, pictured second from the left. 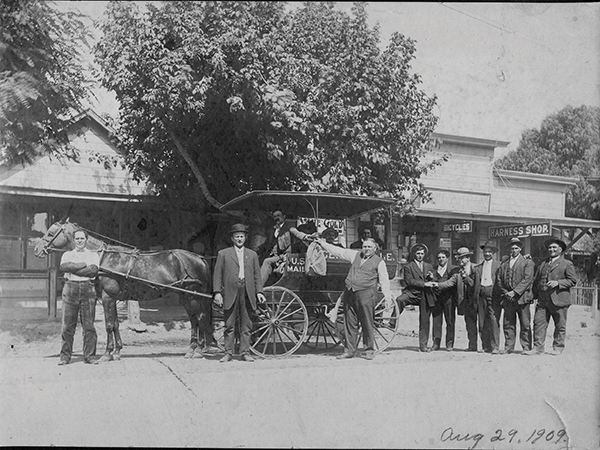 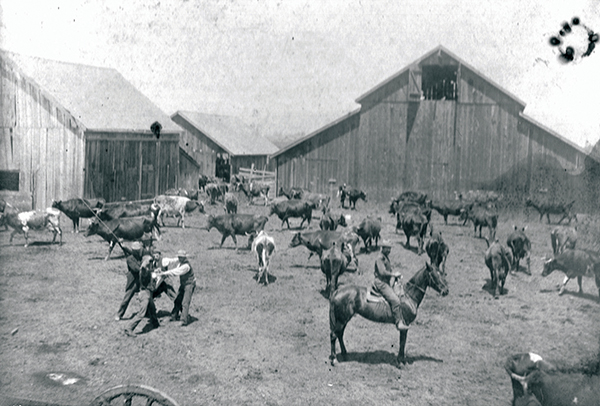 Stevenson Ranch, Centerville (AT1)
John Thomas Stevenson and his wife, Jane, came to the area in 1852. They lived in a one-room log cabin owned by E.L. Beard and finally saved enough money to buy a 380-acre ranch north of Centerville between the Alvarado Road and Alameda Creek (pictured). The ranch prospered and expanded to include the area presently occupied by American High School and the Brookvale Shopping Center and housing development. 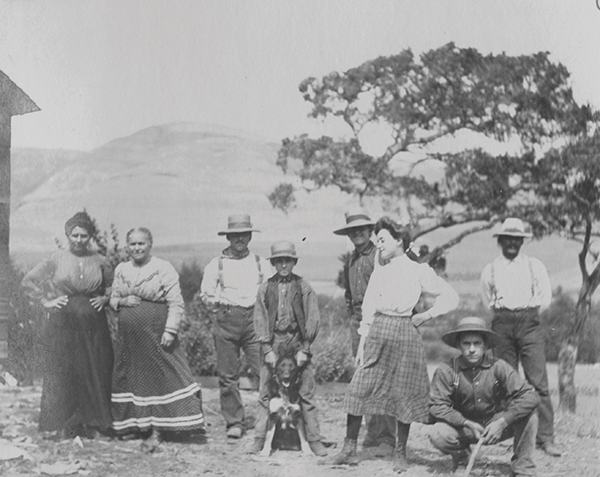 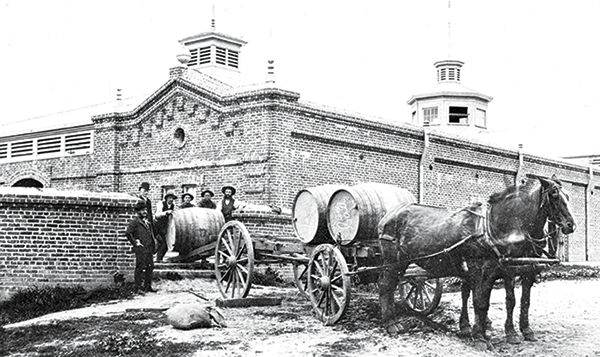 Gallegos Wine Company, Irvington (AT3)
The Gallegos Wine Company started in 1881; one source notes that Eduardo Bale of Napa, grandson of Mariano Vallejo, was manager of the construction team. At the time of its founding, the winery was the largest in California in both volume and square footage. Gallegos applied the engineering ideas from his efficient coffee plantations in Costa Rica and Guatemala. The gravity-flow design meant that wagon loads of grapes from vineyards just up the road entered at the back of the third floor.

Arden station – train approaching with passengers (AT4)
The Arden Station, named after a Shakespearean play, was located on the Patterson place. The groves of Eucalyptus trees were visible from the windows of the passenger trains. The tracks were part of the South Pacific Coast Railroad, one of the most successful narrow gauge railroads in California history. The line ran from San Francisco down to Santa Cruz. The track was later acquired by the Southern Pacific and converted to standard gauge.