And then… April 22, 1970! The first Earth Day. The day that Donna Olsen changed from being a mom, a wife, a caregiver, a homemaker to become a community activist, an environmental leader, an opinion shaper and a model for others to emulate.

The first Earth Day energized the nation and it energized Fremont. Fired with enthusiasm, Donna joined with others similarly energized with the goal of taking action in support of the environment. They, a diverse group, including doctors, educators, activists, and others, began planning from the lessons of the first Earth Day. They organized a community meeting at Washington High School, on the first anniversary of Earth Day. They were amazed that at least 300 people showed up. 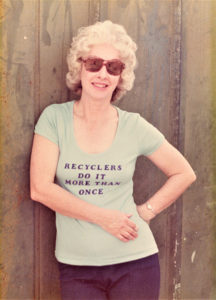 They quickly organized a new group, Tri-City Ecology Center. The basic tenets of the organization were conservation, recycling, education, and advocacy. Donna served on the initial Board of Directors and continued to serve until her passing this month. She filled every position at some time during that time, but her prime role for decades was to be the editor of Eco-Logic, TCEC’s monthly newsletter. Besides that, she essentially touched every piece of paper process through TCEC.

Donna was a teacher and the new TCEC had a major focus on education. Every school had an environmental contact and TCEC prepared and maintained lesson plans for their use in their school.

Donna was integral to the establishment of a drop off recycling center for Southern Alameda County. It was first at Blacow and Grimmer, where Walgreen’s is now. They worked with East Bay Disposal to recycle newspaper, glass, bi-metal (tin) cans, and aluminum cans. Staffed by volunteers and open 6 hours each Saturday and Sunday, it recycled more than 300 tons of materials each year until 1989 when, at TCEC’s urging, curbside recycling made its debut in Fremont. The profits were spread through the community.

TCEC has donated at least $1000 worth of books to the Tri-City libraries each year. Donna selected, bought, archived, organized, and delivered each book. First funded by the recycling center, these donations have continued using donated funds and profits from our lemonade stand at the Festival of the Arts, where Donna was also a major part.

Donna was also a community activist. There was a proposal to build a Grossman’s Home Improvement Store at the corner of Blacow and Central, close to her home. She and her neighbors organized and successfully ran a referendum to cause the project to be dropped.

In 1974, Donna was part of a local committee to support the annexation of Fremont and Newark to the AC Transit District with the promise of an innovative Dial-a-Ride function designed to make a bus system work in a community built for the automobile. She served on the Transit Advisory Committee for many years, advising AC Transit on our issues. While Dial-a-Ride was successful, the dispatch operation made it more costly than normal bus service, and AC Transit dropped it when faced with demands for similar service in other areas of the district.

During the first major drought to hit our area, the water district did not seem to take it seriously, so Donna convinced the TCEC board that it should procure a quantity of kits to be installed in toilets to reduce the amount of water per flush. 500 were provided to the district and were in such high demand, that the district actually adopted the program and became an ally with TCEC in creating the garden at the local History Museum in Mission San Jose (drought tolerant plants.)

Then, in 1980, when the Fremont City Council rescinded the recently adopted Hill Protection policies, Donna joined with several other TCEC members to form the Committee to Preserve the Hills to craft a new set of hill policies in the form of an initiative, collect more than 7000 signatures to place the measure on the ballot in 1981. It passed and hillside development is restricted and controlled forever.

When that same city council abolished the Historical Architecture Review Board, which maintained the historic character of Niles and Mission San Jose, Donna joined with a small group to put that issue on the ballot by referendum. The people supported HARB and it still exists.

Donna served on the South Bay Wetlands Coalition organized to restrict development on sensitive habitats around the bay, which morphed into the Citizens Committee to Complete the Refuge with Donna as co-chair. The Committee worked to expand and complete the San Francisco Bay National Wildlife Refuge which included most of San Francisco Bay south of the Dumbarton Bridge. Congress passed the measure and the refuge size was doubled. Donna was directly responsible in convincing the bank which owned the Caruff property in Warm Springs that it was in their best interests to donate the land to the refuge rather than to try to develop it. 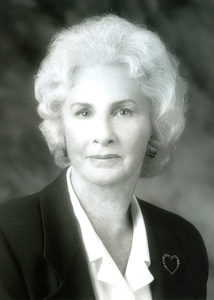 During this period, from 1971 to 2000, Donna also worked for various candidates and issues in the community. She served as treasurer for several campaigns, until Fremont was randomly selected for all campaigns to be audited. The Franchise Tax Board assigned an auditor to review every campaign donation and expenditure, working at Donna’s kitchen table. That was the last campaign she was ever treasurer for.

Also, during this period, Donna was honored by Assemblymember Delaine Eastin who named her “Woman of the Year” for Delaine’s Assembly District and in 1998 she was inducted into the Alameda County Women’s Hall of Fame for her work on the environment. She came a long way from the first Earth Day!

She didn’t stop. She continued on the TCEC board, developing a new program of Eco-Grants where people with good ideas about environmental issues can request funds for materials to make a project happen. Dozens of Eagle Scout or Girl Scout Gold award projects are scattered throughout our area, many of them specific to Donna.

Donna’s impact on our region is profound. Without her, there might be no bus service, the hills might be overdeveloped, the value of the historic Niles and Mission San Jose districts could have been reduced or destroyed, and our region would be diminished without her.

Leo Rosten wrote “The purpose of life is not to be happy. The purpose of life is to matter, to have it make some difference they you lived at all. Happiness, in the ancient, noble sense, is given to those who use to the fullest, whatever gifts or talents God, or luck, or fate bestowed upon them.”

By this definition, Donna had a happy life, but too short and too quick. She is already missed and her reasoned input and her dedication to the environment will be missed even more as time goes by. The Board of Directors of Tri-City Ecology Center is working to develop an appropriate recognition for her to be announced at the TCEC 50th anniversary party next spring. Donations may be sent to TCEC, PO Box 674, Fremont, CA 94537. Or, simply honor her by making changes for the better in your life, your community and your environment.